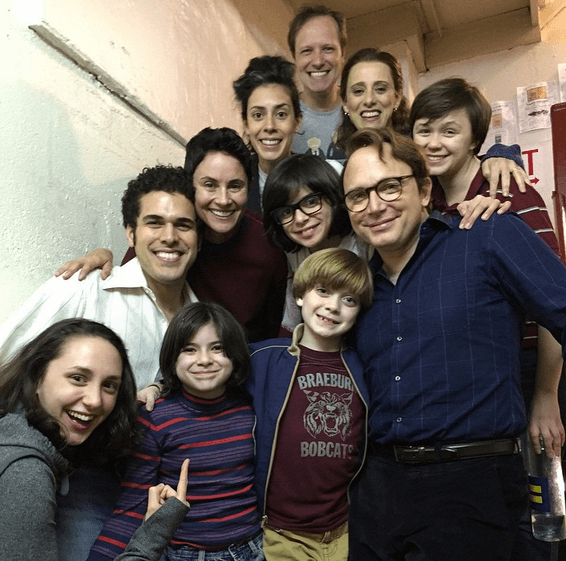 Congrats to Gabriella Pizzolo who made her “Small Alison” debut at Fun Home yesterday!

Fish in the Dark has extended through August 1st! You now have additional weeks to go see Rachel Resheff and the rest of the cast.

Graham Montgomery (Kinky Boots) to take part in a reading of a new musical called Five Points: An American Musical, which tells the story of the origin of tap dance. The reading is set for June 26 at the Labyrinth Theatre Company. More info at BroadwayWorld.com!

Rehearsal photos from Ruthless! are on BroadwayWorld.com! Take a look at Tori Murray and the cast in action HERE.

And here are more pictures from the kids of Fun Home, The King and I, Matilda, School of Rock, Les Miserables, and Ruthless! 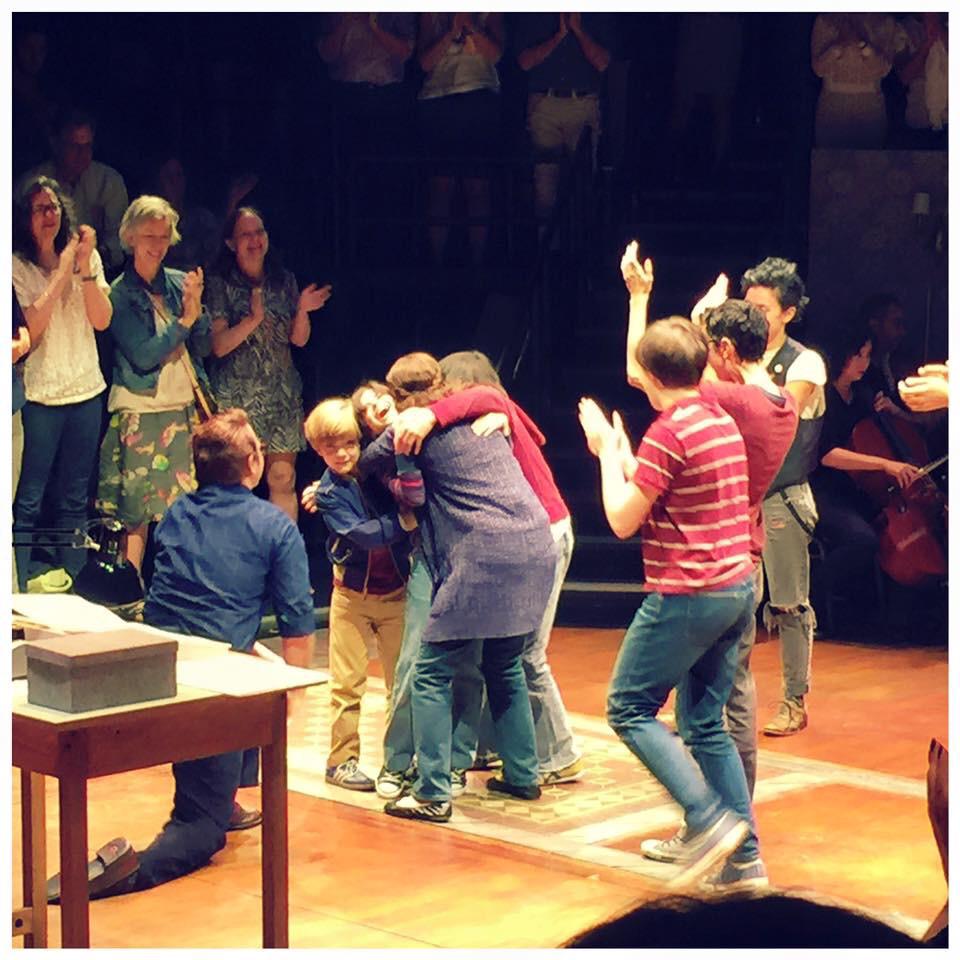 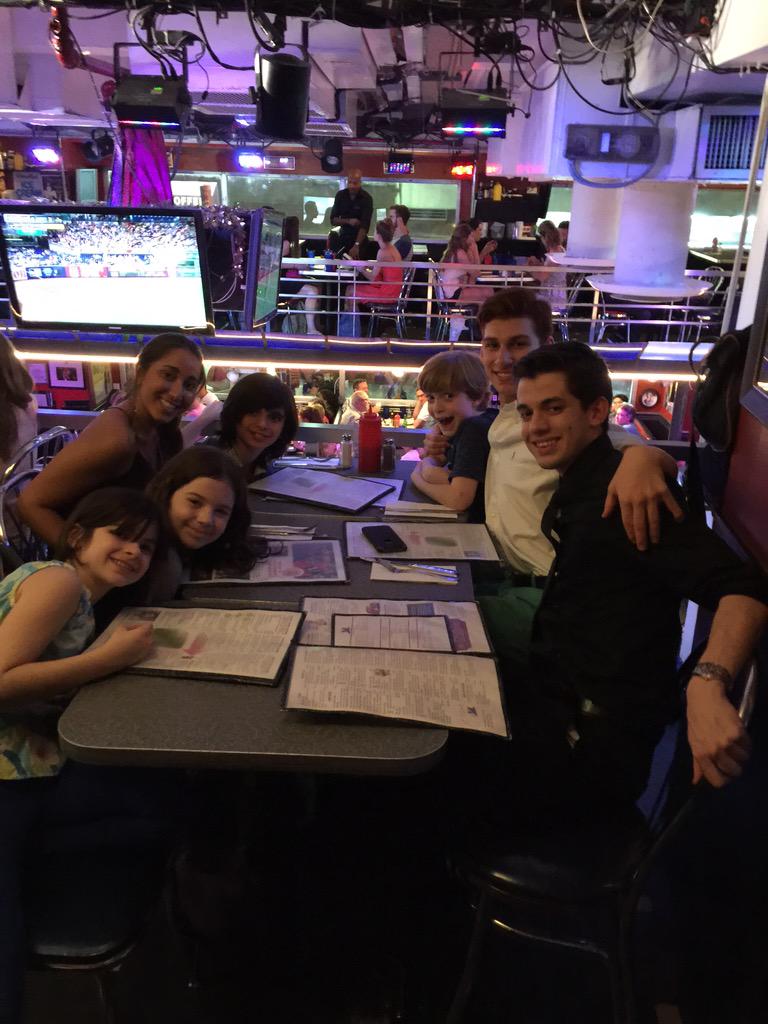 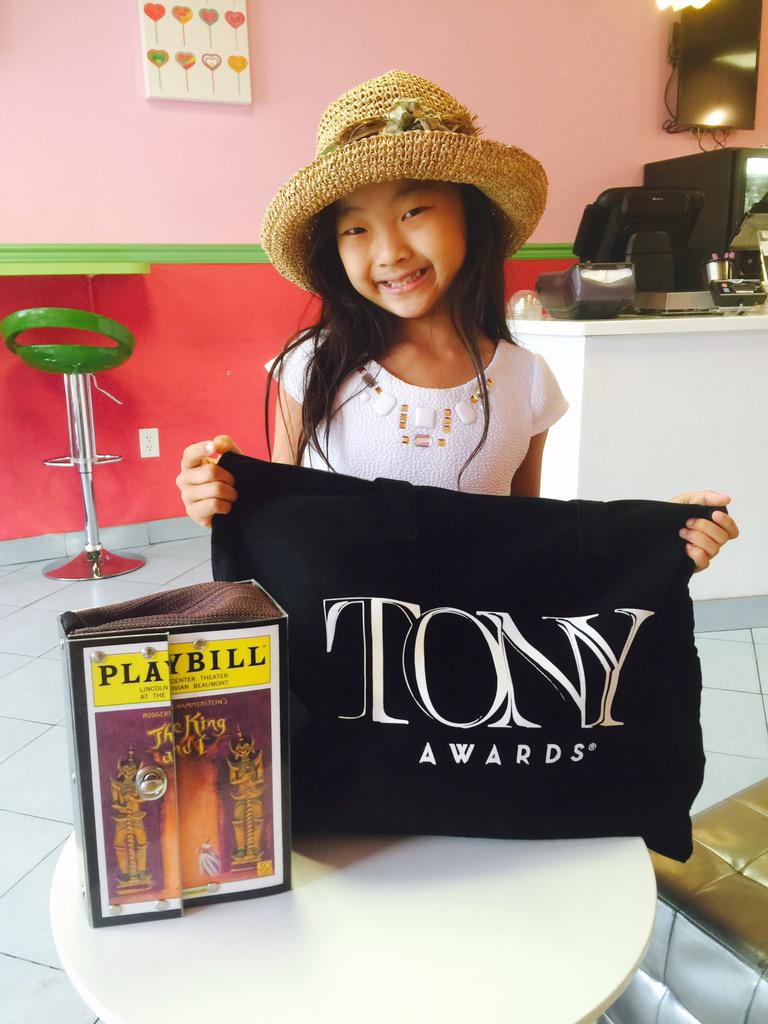 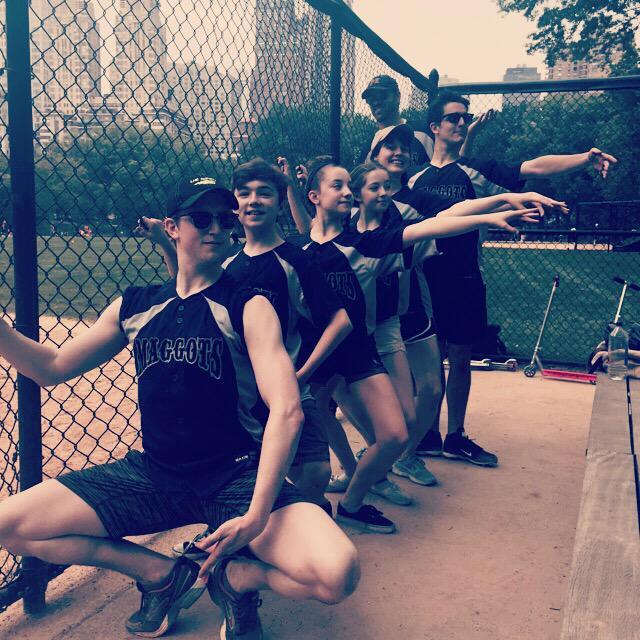 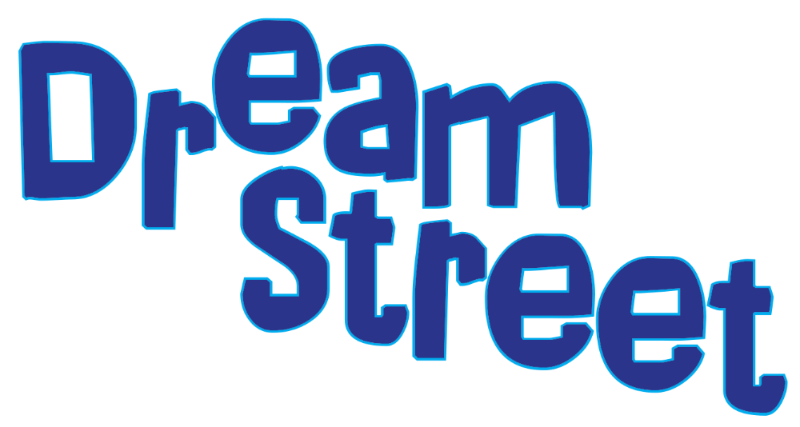 The cast of Dream Street has been announced! The Off-Broadway production will premiere in August AND features almost 60 kids! Those kids include kids from Kinky Boots, Radio City Christmas Spectacular, Doctor Zhivago, Once, A Little Princess, Little Miss Sunshine, On A Stool at the End of the Bar, and way more. We will have the full cast on our website soon! Get a peak at DreamStreetNYC.com. Congrats, everyone!

And here are more pictures from the kids of Fun Home, The Lion King, The King and I, Ruthless!, Kinky Boots, Matilda, Fish in the Dark, and Finding Neverland! 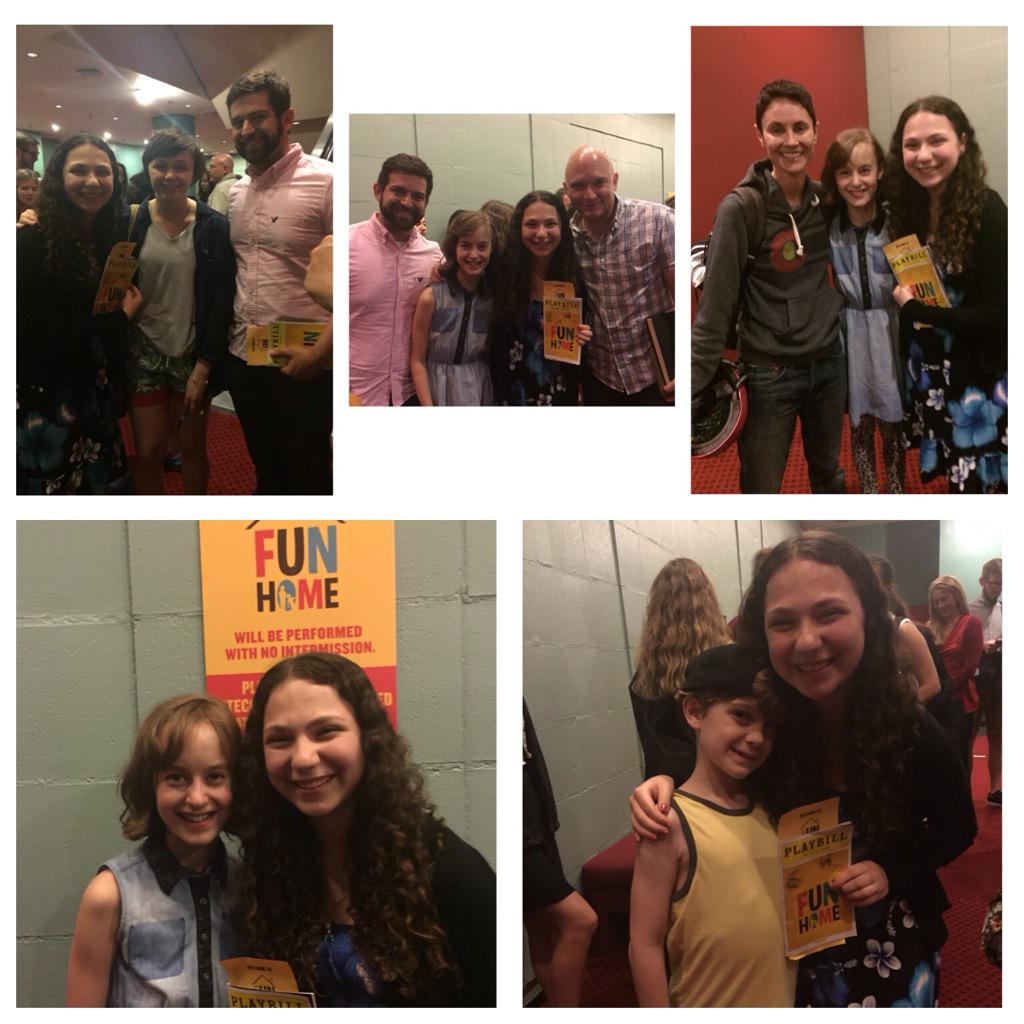 We are definitely the only people who think this is funny

Jon Viktor Corpuz (The King and I) talked with Broadway Box about his life as a teenager on Broadway as well as his experience with The King and I! Read it HERE.

Congrats to Eleanor Koski (Les Miserables) who made her debut as Little Cosette last night!

“The Escort” (feat. Rachel Resheff of Fish in the Dark) is headed to VOD! The film’s distribution rights were purchased just before its world premiere at the LA Film Festival this week. The movie will be released on July 28th.

Photo coverage from the Merman’s Apprentice concert at Birdland (feat. Elizabeth Teeter of The Audience) are now online! Check it out at BroadwayWorld.com.

And here are more pictures from the kids of The Audience, Matilda, Fun Home, The King and I, Les Miserables, The Lion King, and Finding Neverland! 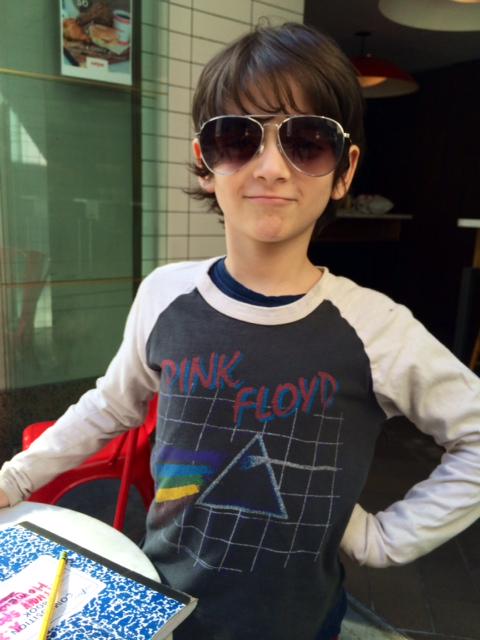 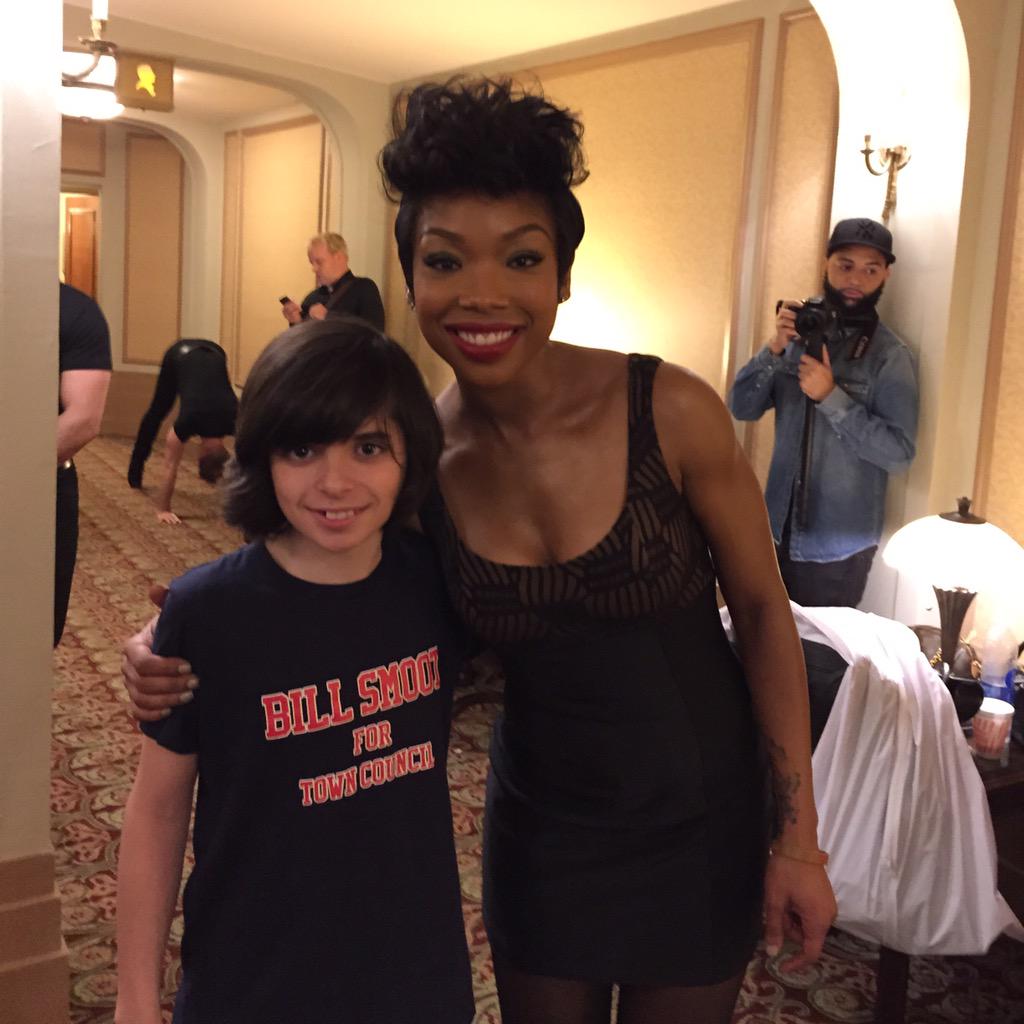 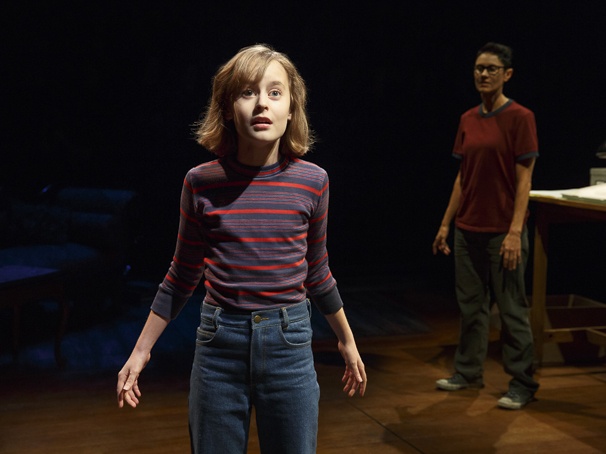 School of Rock will hold a special preview at Gramercy Theater in NYC! The show will be presented Jun. 3-6 as a staged concert version in lieu of an out-of-town tryout. The Broadway production will begin previews on Nov. 2nd with opening night on Dec. 6th. To purchase tickets and get more info, go to SchoolOfRockTheMusical.com/Gramercy.

Be sure to get your tickets for Cabaret for a Cause in LA on June 1st – which is only 3 days away! Come support a great cause (St. Jude’s) while watching performances from kids of “Dance Moms”, Annie, Matilda, and way more. We will also be there covering the event and we think you all should be there too! Get your tickets at CabaretForACause.us.

Jake (The King and I) and Sydney Lucas will present at the Drama Desk Awards this Sunday! For a full list of presenters, go to TheatreMania.com. You can watch the livestream of the event at Livestream.com at 5pm PST/8pm EST.

A new musical Dream Street will premiere Off-Broadway in August! Presented by Kids of the Arts, the show is described as “World famous director Sebastian Rickter is holding open auditions for a new West End musical called Dream Street and is looking for undiscovered talent.” Casting is currently underway. The production is looking for Non-Equity kids (and Equity kids under 14 years old) ages 8-17 years old. More info at Playbill.com!

Lots of alumni (and current kid) news from TV and Film! Aidan Gemme (Finding Neverland) can be seen in the recently-released film “Tomorrowland”. Isabela Moner‘s (Evita) new TV series “100 Things To Do Before High School” will air a special preview tomorrow night 9pm/8c on Nickelodeon before next week’s June 6th premiere. Niles Fitch (Our Lady of Kibeho, The Lion King) will guest star on “Law & Order: SVU”. Zachary Unger (Newsies) will co-star on the upcoming CW series “Containment”. That preview you can catch on YouTube. Last but not least, Maria May (Billy Eliot) will appear opposite Alec Baldwin in “Back in the Day”, which is due out in theaters in 2016. Congratulations everyone!

A big screen adaptation of Motown is on the way! No release date just yet. You can view the full article at Billboard.com.

Video from the Matilda kids’ performance at Stars in the Alley is now online! Watch below:

And here are more pictures and video from the kids of The King and I and Fun Home! 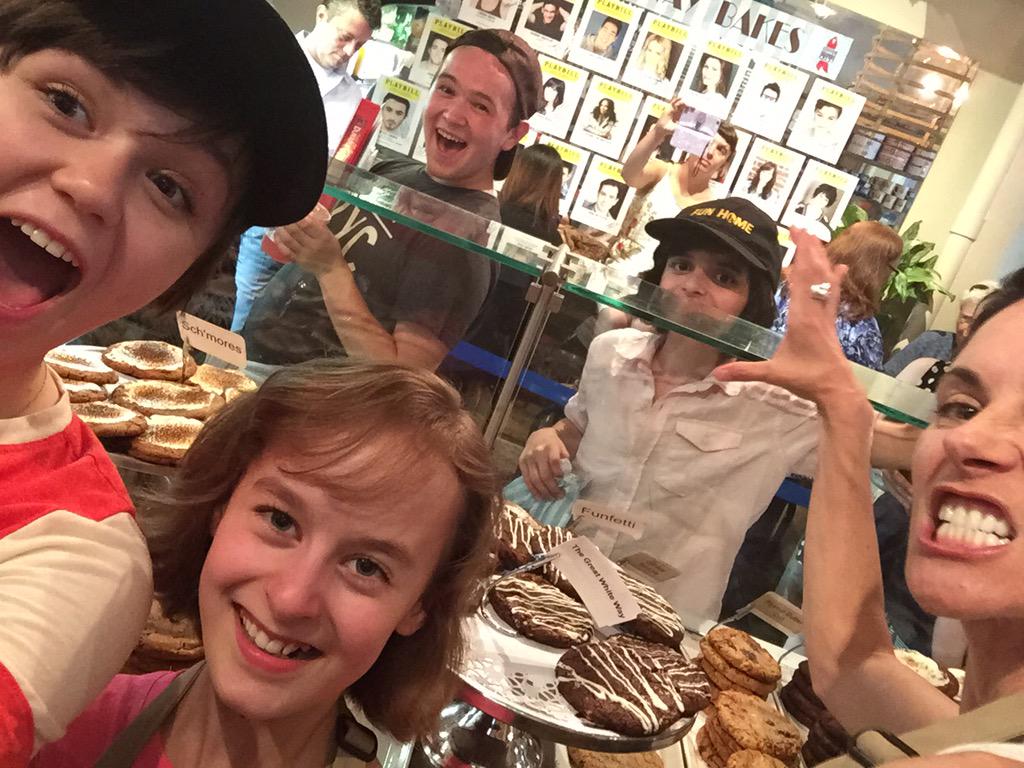 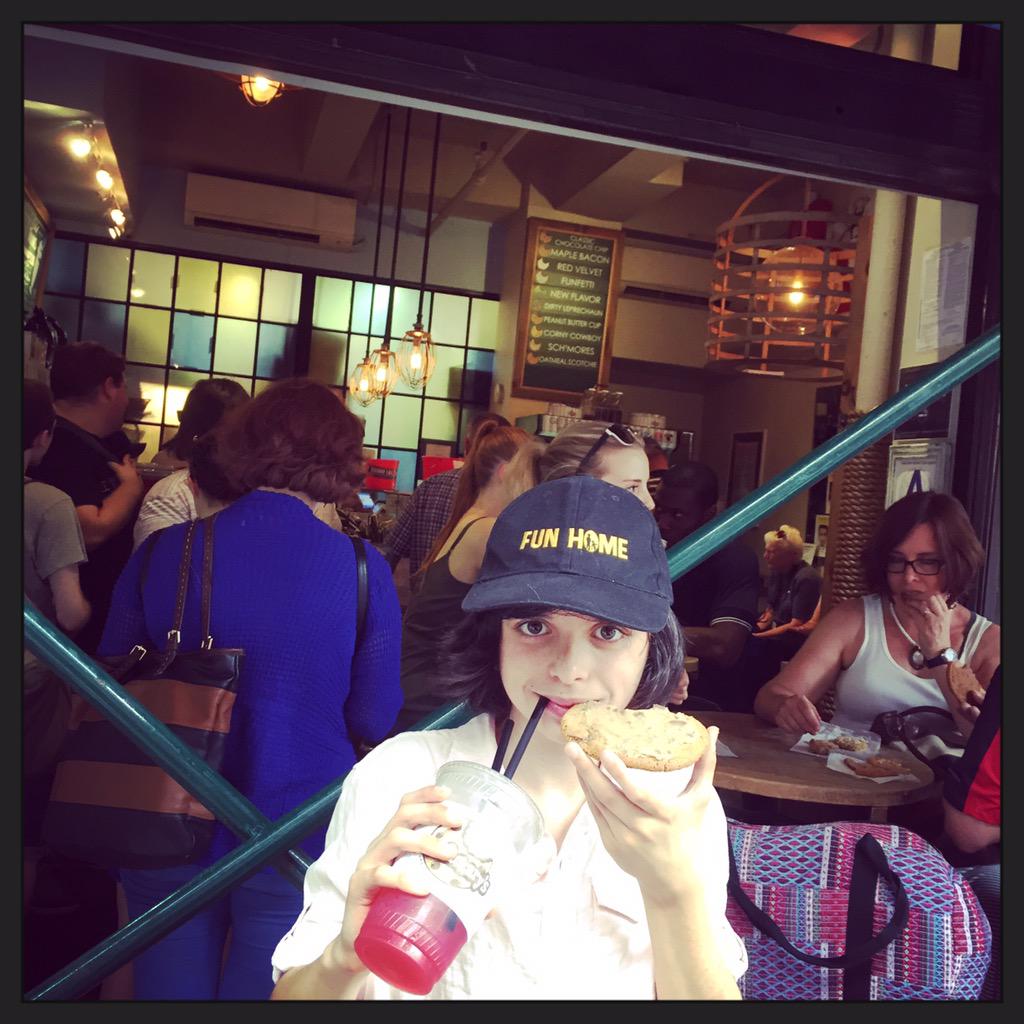 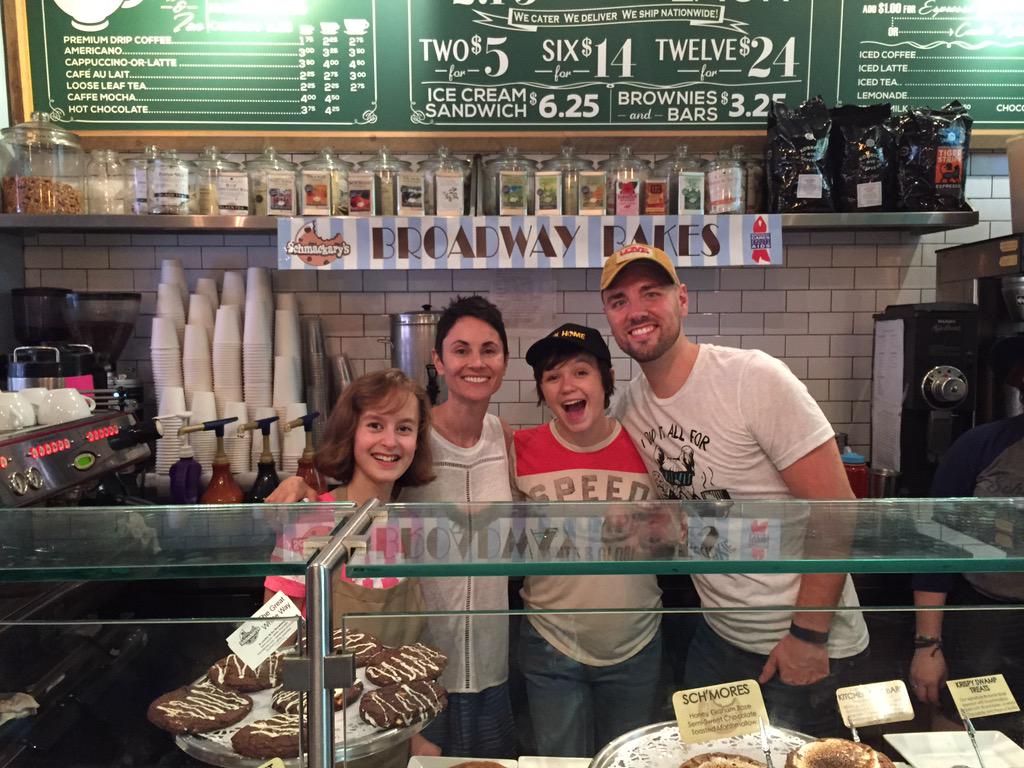 The Alisons of Fun Home sing for tips at Schmackary's Broadway Bakes!

There is a lot of photo coverage from Stars in the Alley, featuring kids from several of our featured shows! Check it out on Playbill.com and BroadwayWorld.com (Matilda and Fun Home)!

Check out this video of the kids of Fun Home performing on “The View”!

And here is a video of the Fun Home kids performing at Stars in the Alley!

Sydney Lucas (Fun Home) participated in Broadway Bakes at Schmackary’s today from 5-6pm! We unfortunately couldn’t make it, but we hope you did!

See how the kids of The King and I are prepping for the Tony Awards in the pictures below!

And here are pictures and videos from the kids of The King and I, Fun Home, Finding Neverland, and Matilda! 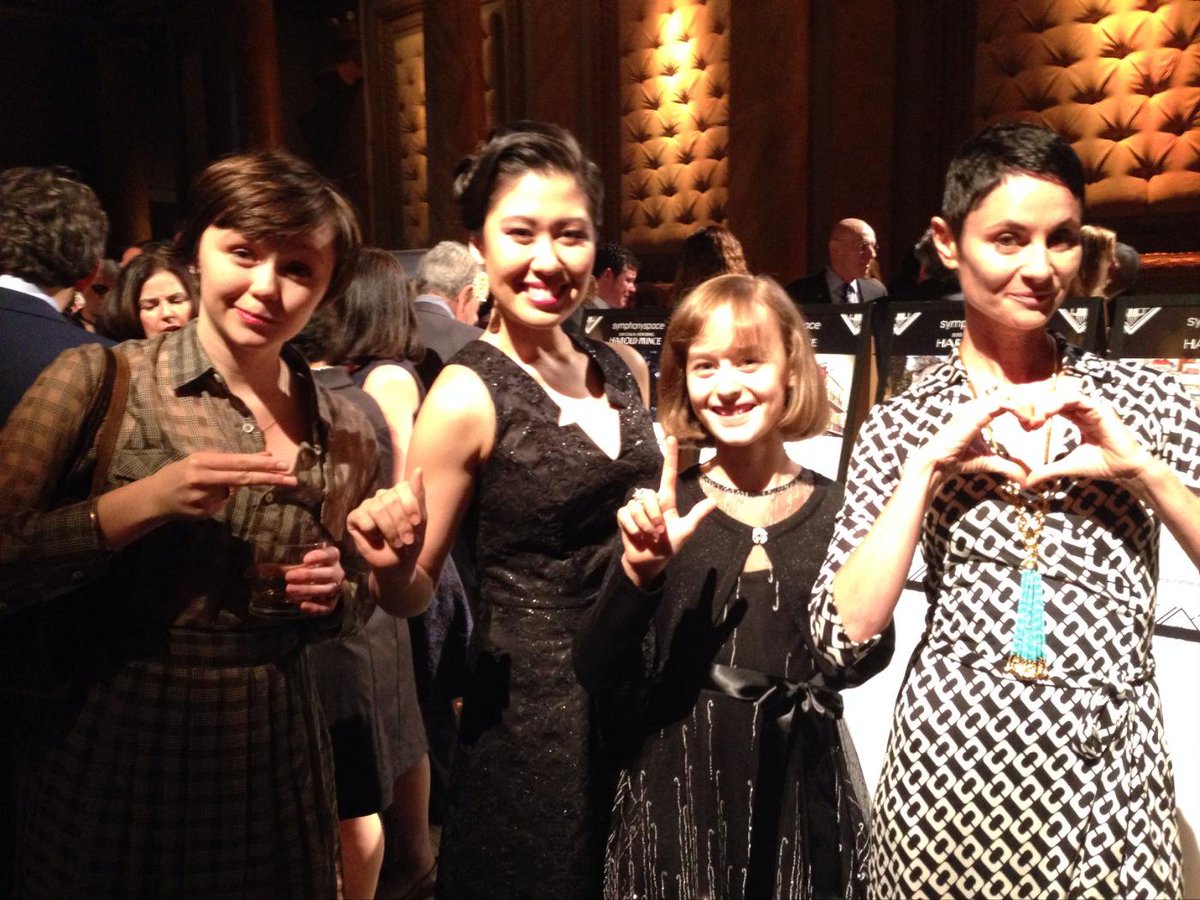 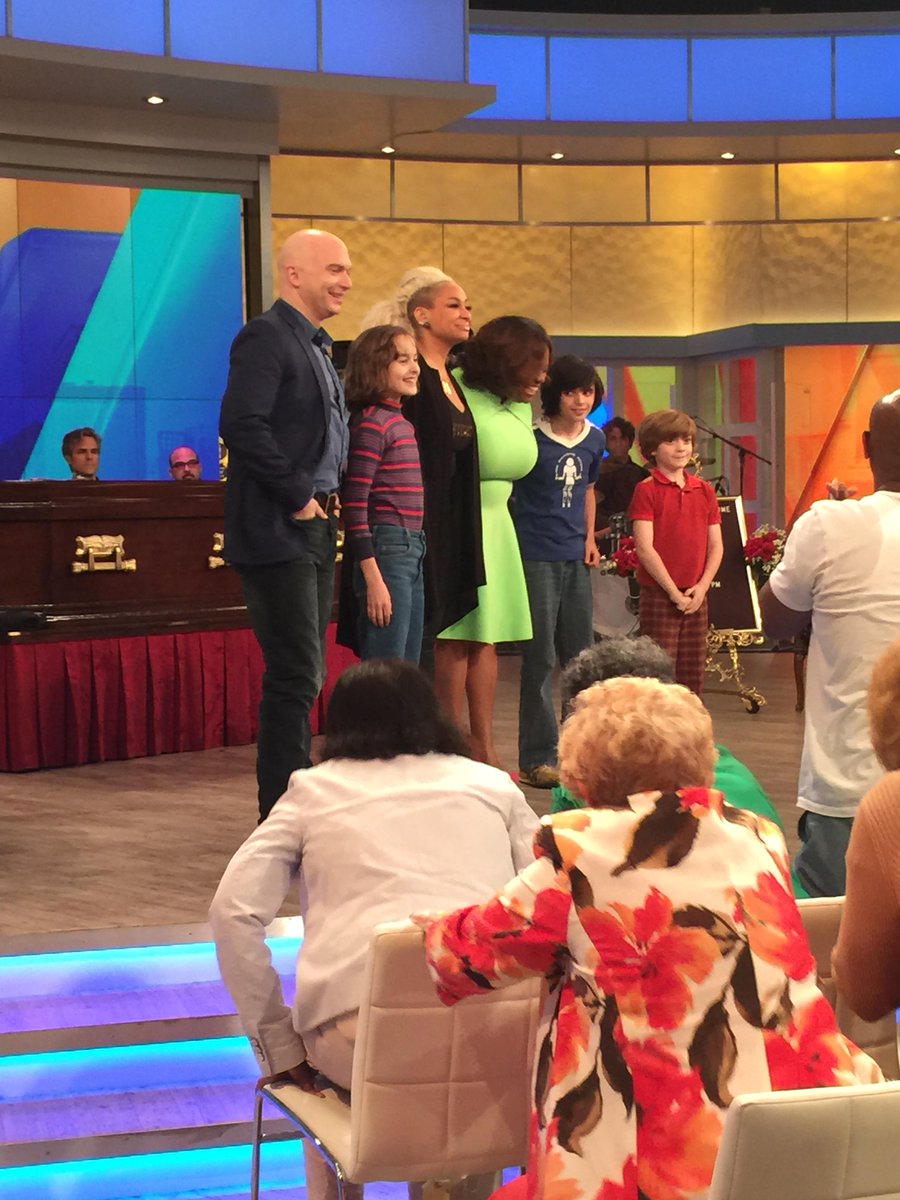 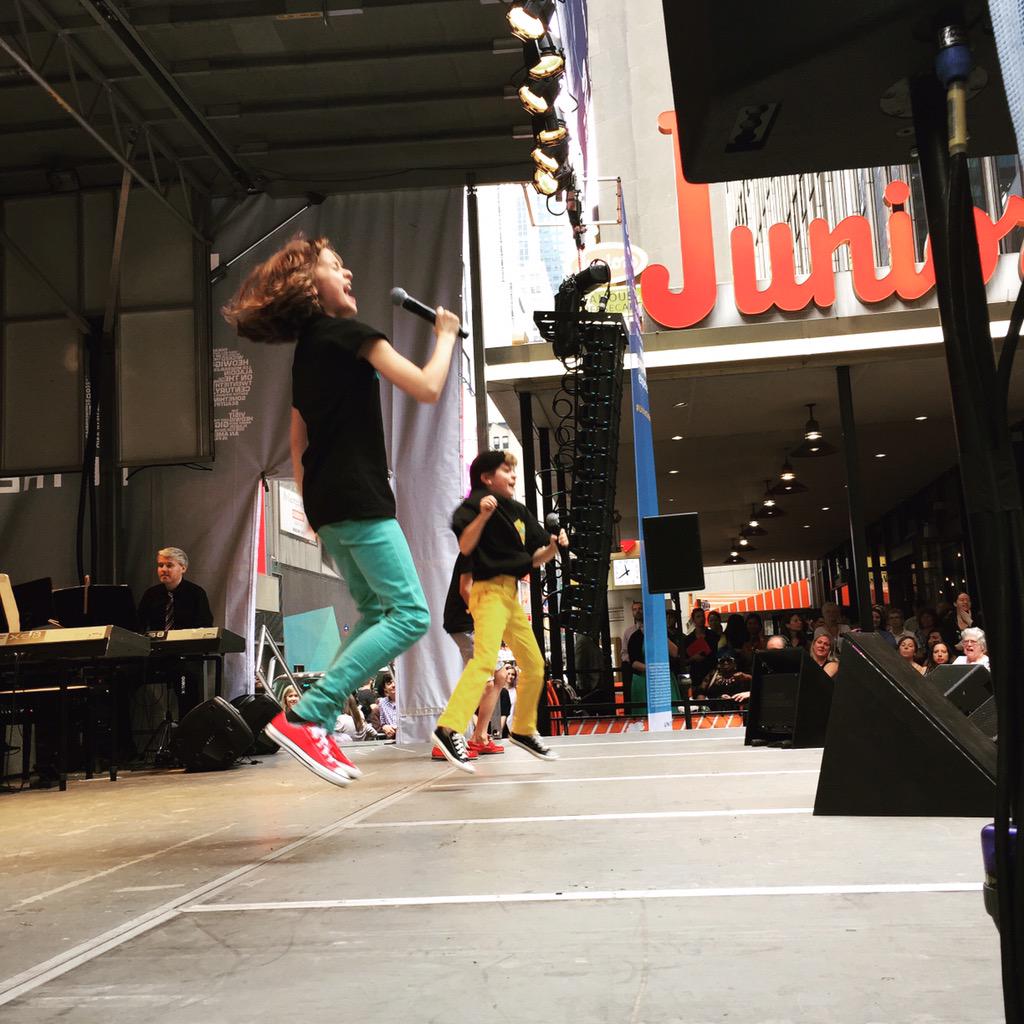 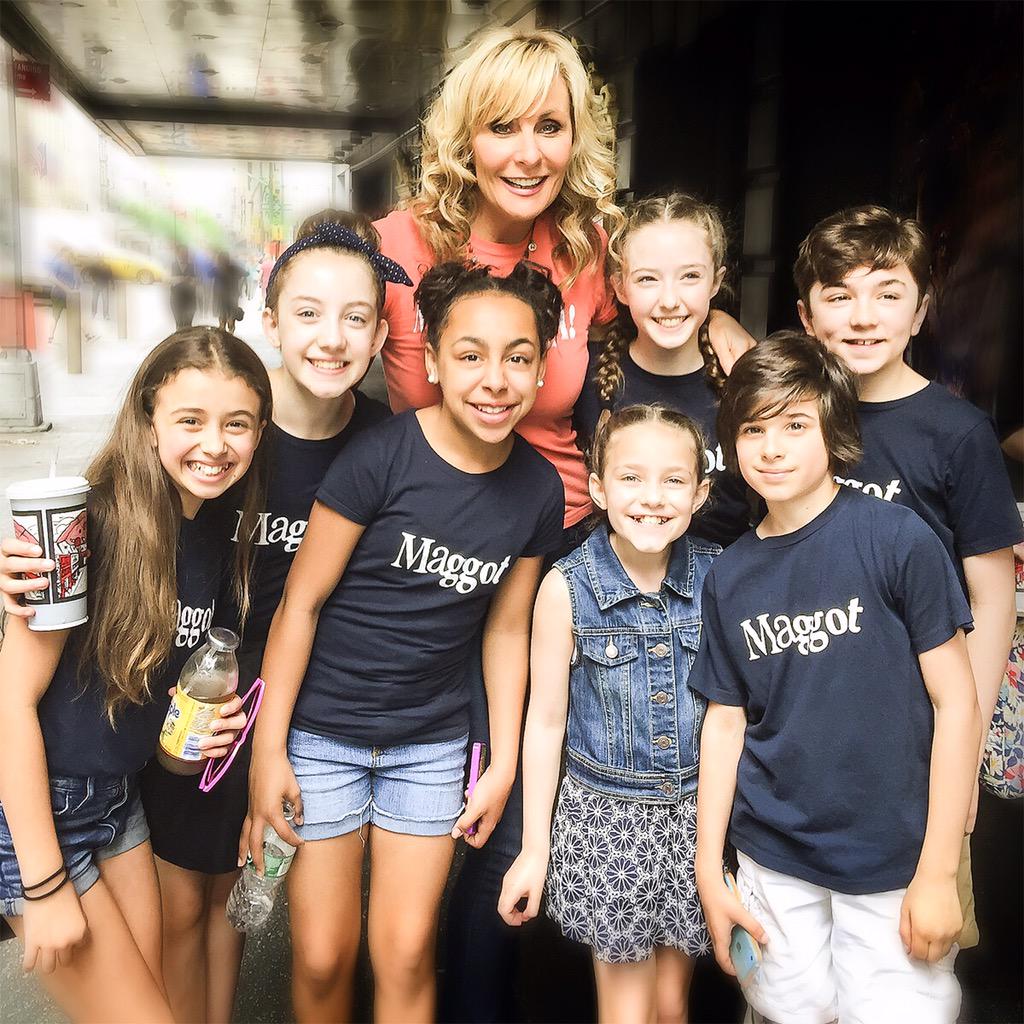 From the Front Now! @funhomeMusical

#Regram from @darrencriss, thanks for catching this action shot of "Come to the #FunHome," Darren! #StarsInTheAlley

The Color Purple will begin previews at the Broadway Theater on November 9th with an opening night set for December 3rd. Casting is TBA!

The Fun Home kids will perform on “The View” tomorrow on ABC! Check your local listings. We’ll have a clip up later that day!

Congratulations to Nicholas Jenkins (Off-Bway’s Waiting for Godot) who has recently joined the national tour of Kinky Boots as the Young Lola s/b. Go see the show if you can!

Doctor Zhivago will get a cast album! The musical will record a cast album soon with a release date set for July 31st. More details can be found at TheatreMania.com.

Stars in the Alley occured today and we have a bunch of pictures and video from that – along with the kids of Matilda, Fun Home, On Your Feet, The Lion King, and Les Miserables – below! 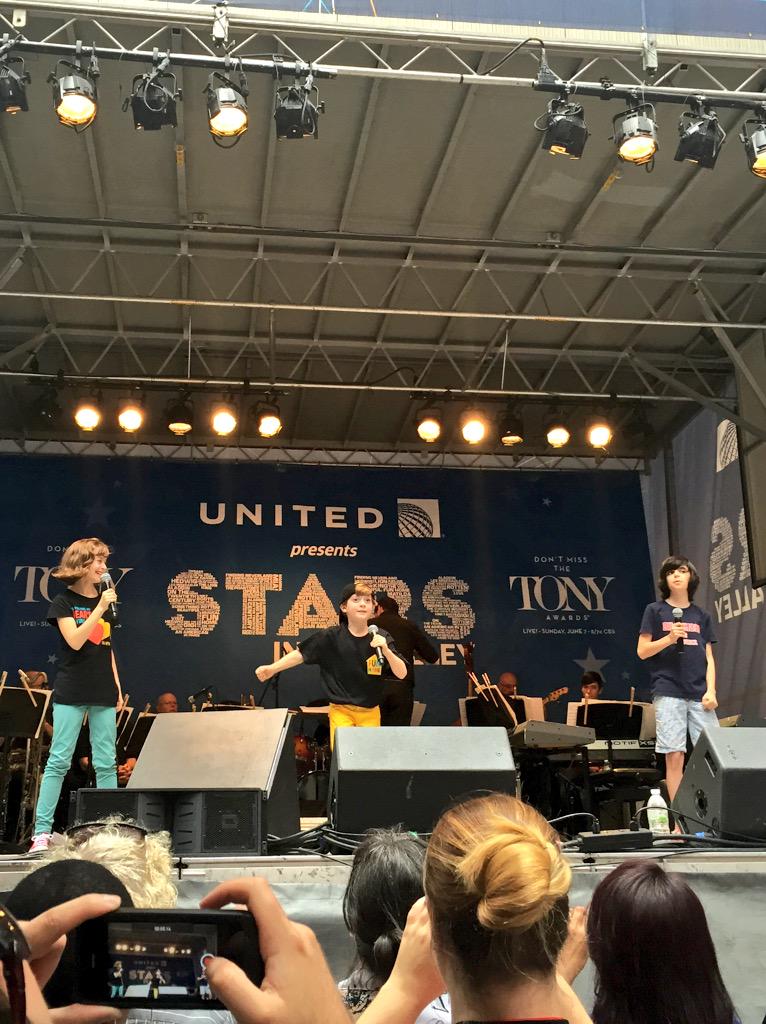 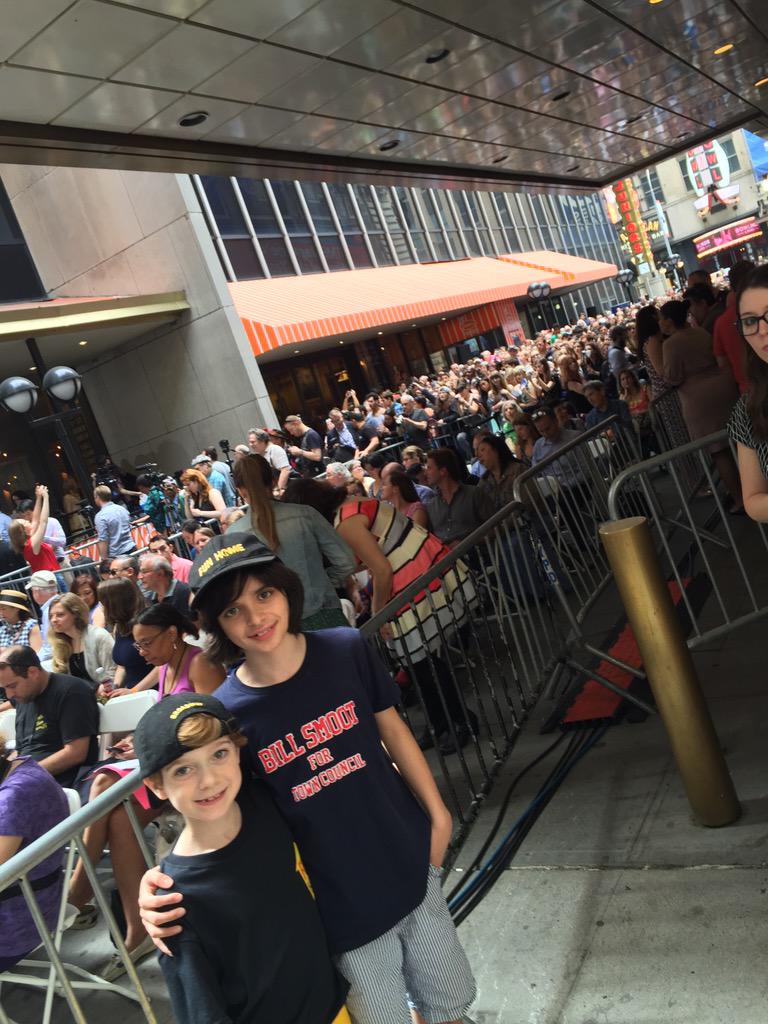 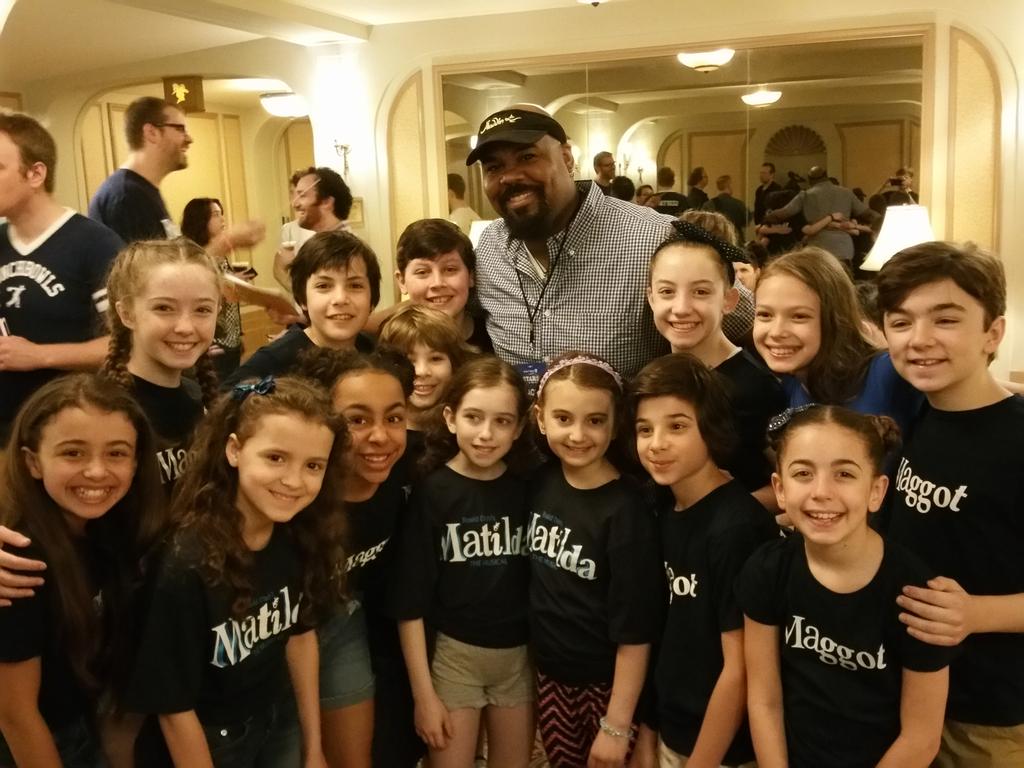 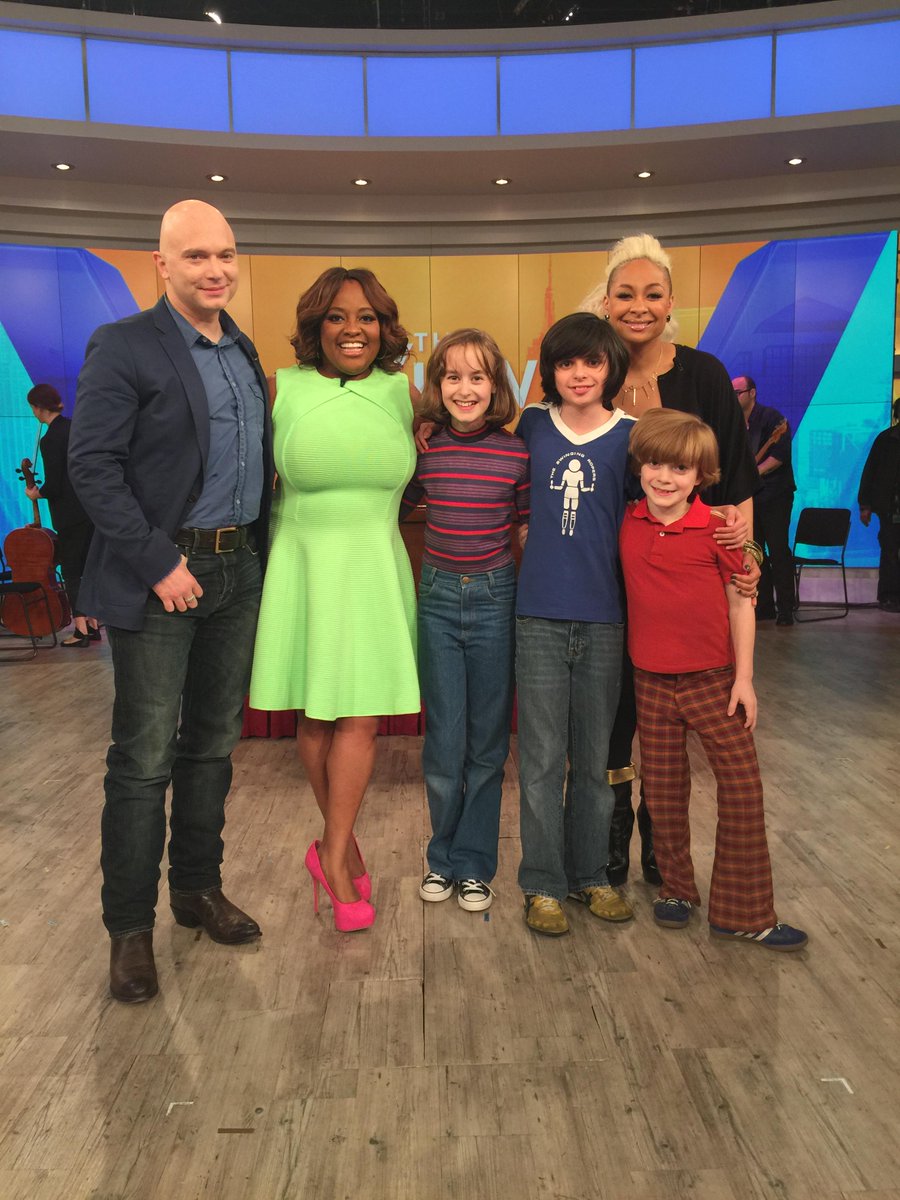 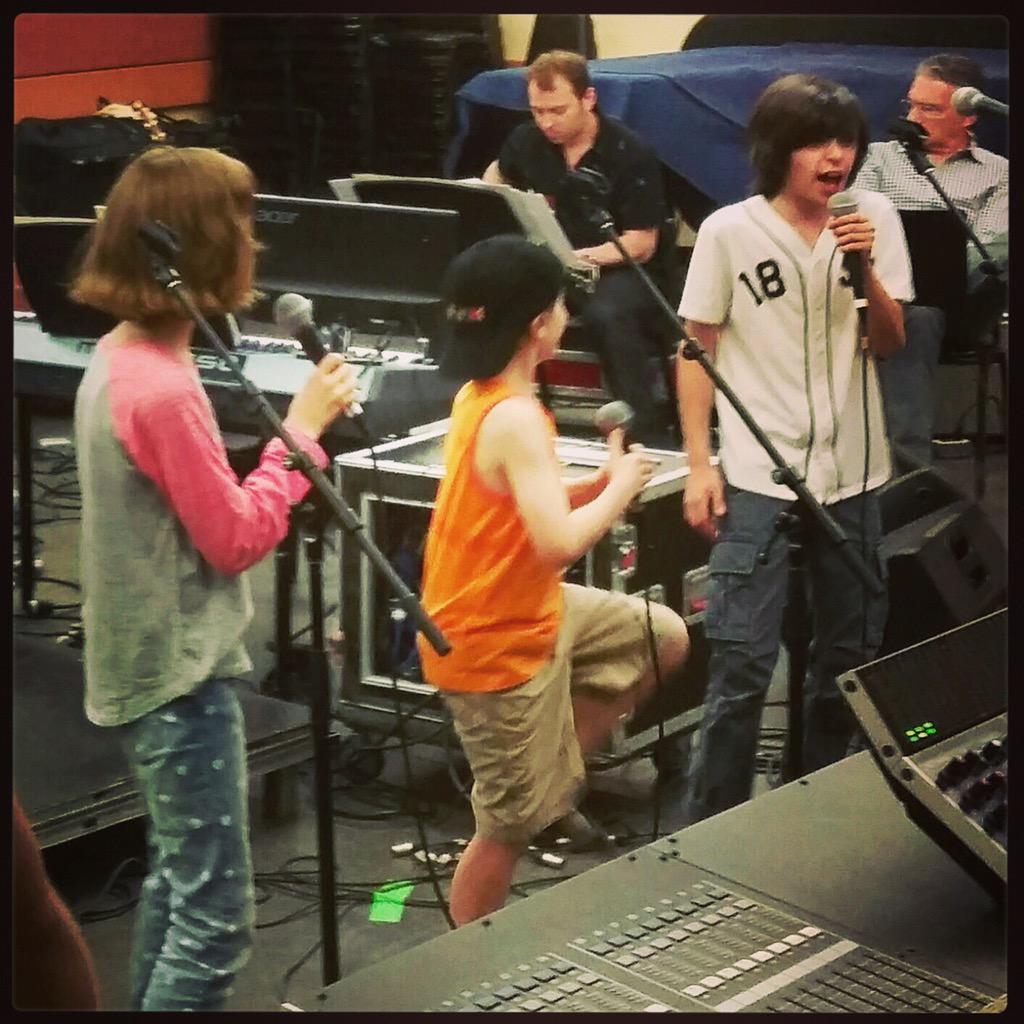 A message from the kids of MATILDA! Catch them and Sydney Lucas (Fun Home) today at #StarsInTheAlley! pic.twitter.com/f2UbRllYDu

Tori Murray will reprise her performance as Tina Demark in the Off-Broadway return of Ruthless! Performances begin on June 25th at the St. Luke’s Theater. Welcome back, Tori!

The Obie Awards were last night! Congratulations to Punk Rock and The Nether which both won Obie Awards for Direction. View the full list of winners at TheatreMania.com.

The updated Fun Home cast recording is now available! You can order as PSClassics or Amazon.com. Also, Sydney Lucas will appear at Schmackary’s to help sell cookies for BC/EFA! She’ll be at Schmackary’s with her castmates Emily Skeggs and Beth Malone on May 28th from 5-7pm. Be sure to go!

Hannah Nordberg (Little Miss Sunshine) had a special opening night message for Off-Broadway’s The Way We Get By! Watch the video below and be sure to catch Hannah in Cabaret for a Cause in LA on June 1st:

And here are more pictures from the kids of Fun Home, The King and I, The Lion King, Matilda, and Finding Neverland!

@funhomemusical kids could NOT have been more excited! @iainlovestheatre came to the show!!! #newfriends

@rosie could not have been nicer to the kids of @funhomemusical Class act, that lady. 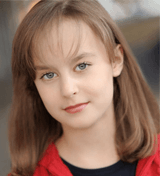 Congratulations to Sydney Lucas (Fun Home), who was nominated for a Broadway.com Audience Choice Award for Favorite Breakthrough Performance (Female)! A lot of our featured productions also received nominations–check out our list HERE and the full list of nominees on Broadway.com. Congrats to all!

Check out photo coverage from Cabaret for a Cause on Playbill.com!

We just found a video that Sydney Lucas (Fun Home) did for the Sonnet Project back in July! Check it out below:

And here are pictures and videos from the kids of The Lion King, Kinky Boots, Iowa, Les Miserables, Matilda, Annie, The King and I, New York Spring Spectacular, and Fun Home! 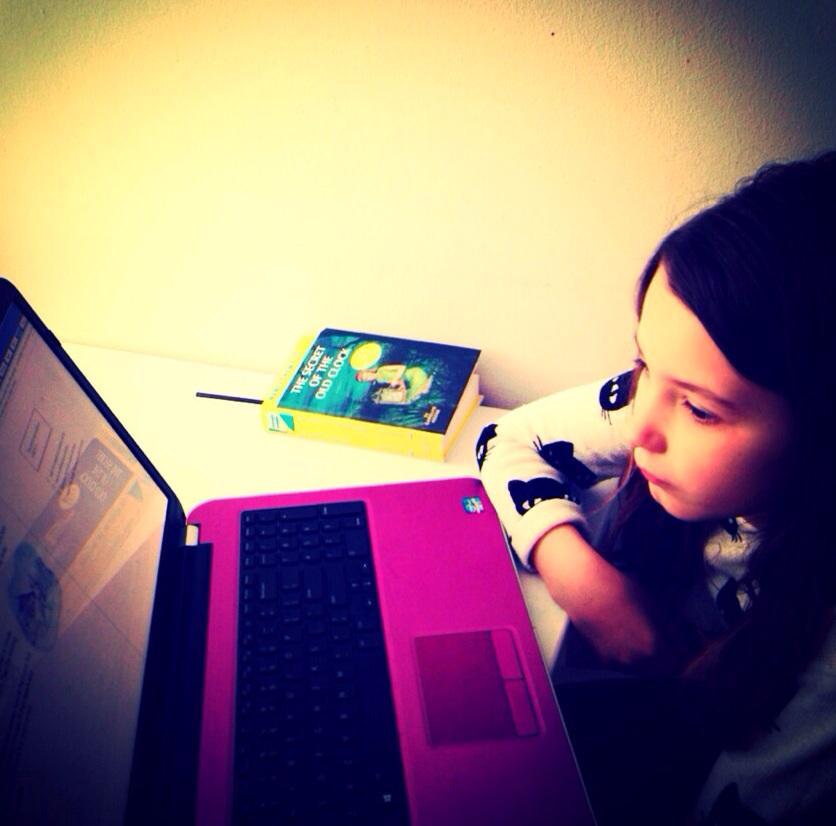 Happy to see my friend @miasinclairjenness on the way to school before she leaves for tour! I'll miss you!!

Excited to sing in Times Square along with my Annie sisters as part of Tunes for Times Square! We'll be singing between 12p – 1p.

When @rysteele comes for a visit, everyone gets a lift! @funhomemusical 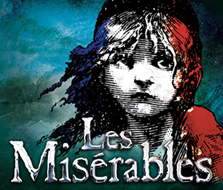 Fabi Aguirre and Joshua Colley (Les Miserables) were both featured in Les Miserables‘s Easter Bonnet skit! They appear in the video of the event and the backstage video, both below:

Backstage at Easter Bonnet Competition 2015 from Broadway Cares on Vimeo.

To all those performing in Cabaret for a Cause and Songs Of Our Youth tonight: break lots of legs and have great shows!

Sydney Lucas (Fun Home) was named one of this season’s breakout performers by Playbill! Congrats, Sydney! Check out the article on Playbill.com.

Sadie Seelert (A Little Princess), Carly Paige Baron (Mary Poppins), and Ava Ulloa (Matilda) will perform at the launch event for the new book Stagestruck on May 9th, 2015! Get more information HERE.

The boys of Finding Neverland were featured in the latest episode of “Never Grow Up”! Check out the episode on Broadway.com or below:

Congratulations to Sophie Knapp (Once), who has booked a commercial for Smart Car!

Check out production photos from The Painted Rocks at Revolver Creek, featuring Caleb McLaughlin (The Lion King), below!

See a preview of the action on stage in THE PAINTED ROCKS AT REVOLVER CREEK, written and directed by Athol Fugard.Photos by Joan Marcus.

And here are pictures from the kids of The Lion King, Matilda, The King and I, and Fun Home! 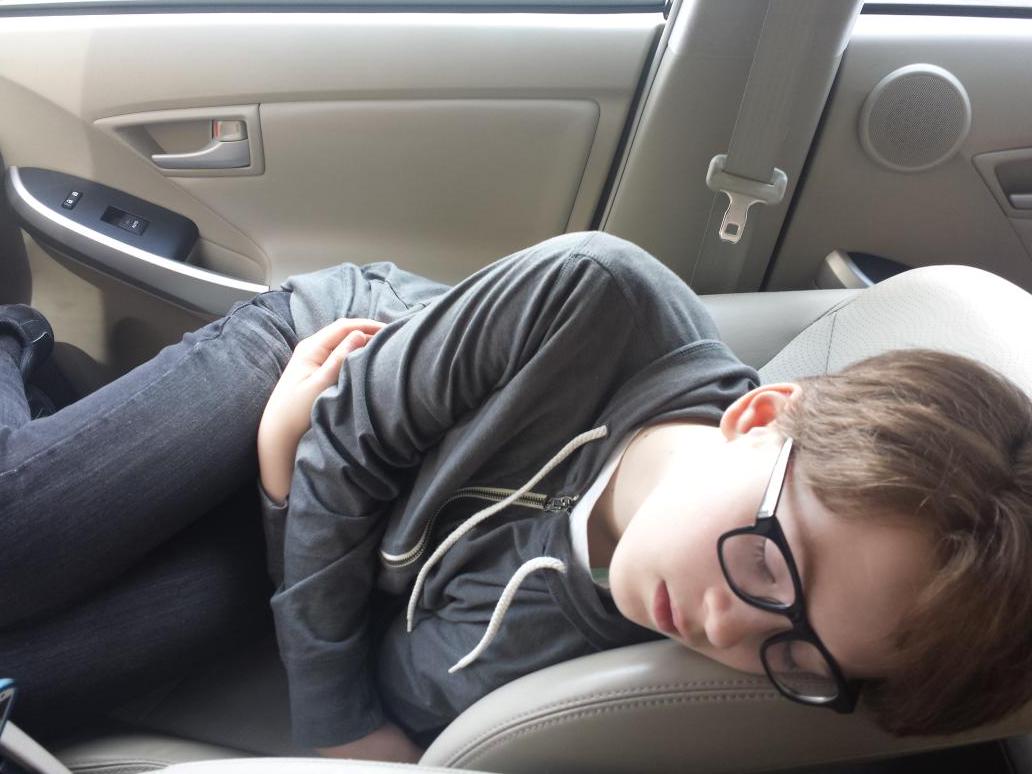 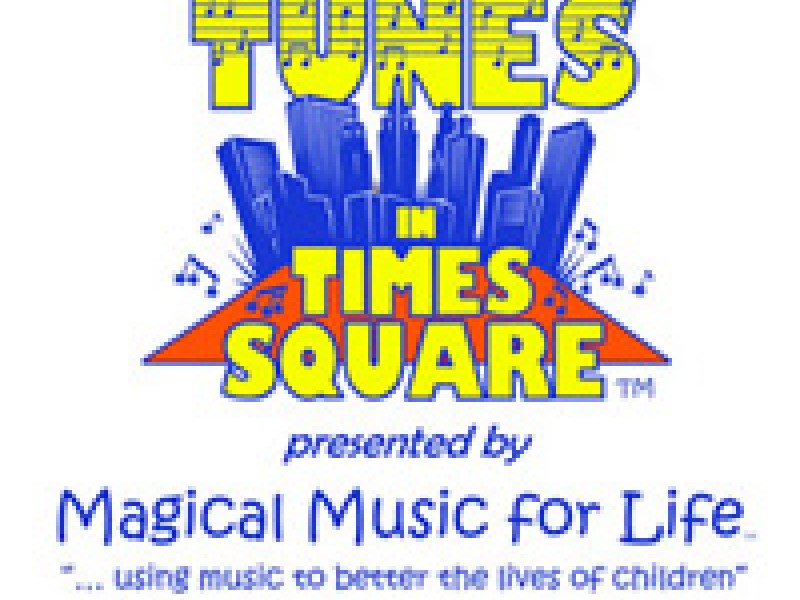 Kids from Annie, The King and I, The Lion King, Motown, School of Rock, The Color Purple, Macbeth, A Little Princess, Matilda, The Sound of Music Live, Pippin, Priscilla Queen of the Desert, and more will perform at Tunes in Times Square on May 3, 2015, to benefit the Magical Music for Life foundation. Get more information HERE!

There is a great throwback interview with the Broadway kids and teens of 1977! Check it out on Playbill.com.

Check out rehearsal and recording studio pictures from K’Lynn Jackman (The Lion King), featuring many other Broadway and Off-Broadway kids, below!

HONORED AND BLESSED TO BE PART OF THIS MONDAY NIGHT FUN TIMES WITH FRIENDS AT REHEARSAL FOR AN AWESOME PROJECT. THANKS…

GREAT MEMORIES WITH MY FRIENDS AT THE STUDIO. I HAD A BLAST!WWW.KLYNNJACKMAN.COM #GLORYTOGOD #STUDIO #HAVINGFUN …

And here are videos and pictures from the kids of The Lion King, The Audience, The King and I, Finding Neverland, Matilda, and Once!