What Little People Can Do 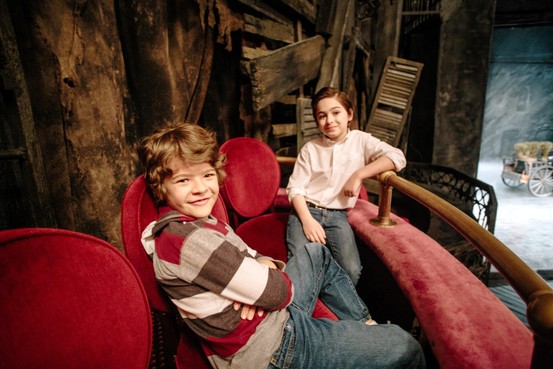 It’s probably safe to say that every boy with an interest in musical theater dreams of playing Gavroche in Broadway’s “Les Misérables.”

Now that a new revival of the show, starring Ramin Karimloo as protagonist Jean Valjean and Will Swenson as his nemesis Javert, is playing at the Imperial Theatre, two budding actors are getting their shot at the young street urchin’s famous second-act solo, “Little People.” Gaten Matarazzo, 11 years old, and Josh Colley, who is 12, currently alternate the role.

“By the first week we were already best friends,” said Mr. Matarazzo.

Mr. Matarazzo commutes over two hours to the theater on 45th Street from Little Egg Harbor, N.J., near Atlantic City, so by the time he gets home after a three-hour performance, it can be 1:30 a.m.

“I sleep on the bus,” he said, especially because he has to report to school in the mornings. (He typically takes matinee Wednesdays off from his sixth-grade classes.)

The young actor, who usually auditions with the Michael Jackson song “Ben”—”I sing it differently than he did,” he said—made his Broadway debut in the 2011 musical “Priscilla, Queen of the Desert.” He began trying out for the role of Gavroche in the “Les Misérables” tour when he was 7, eventually landing it last February. He traveled around the U.S. and Canada with the company until August.

One of the hardest parts of doing the show, he said, is getting shot in the second act and pretending to fall over the barricade.

“It gave me goose bumps the first time I did it,” said Mr. Matarazzo.

Eventually, he’d like to mature into the role of Enjolras, who belts the show’s anthemic “Do You Hear the People Sing?” (Actor Kyle Scatliffe is currently playing the part.)

“He’s so inspiring to me,” said Mr. Matarazzo.

For now, Gavroche’s personality suits him just fine, though.

Mr. Colley’s parents run a theater company in Tampa, Fla., and they were the ones who suggested he try acting. After a stint in “A Christmas Carol” down south, he joined the tour of “Les Misérables” as Gavroche and found his way to Broadway in “Newsies,” for which he and his family moved to New York.

“My mom was always like, ‘You should play Gavroche one day.’ And I was like, ‘Who’s Gavroche?’ ” Mr. Colley recalled. “When I finally saw it, I thought, ‘Oh my God, this is awesome.’ ”

His commute, however, is far easier than Mr. Matarazzo’s. He currently lives near the theater on 45th Street. Still, Mr. Colley said, after the high of a performance, “it takes me a really long time to get to sleep.”

Bedtime tends to be around 12:30 a.m. On days off—Mondays—”I just hang around the house watching TV.” Regular viewing includes “The Carol Burnett Show,” “The Brady Bunch” and Cartoon Network’s “Adventure Time,” he said.

Mr. Colley’s fraternal twin brother is also an actor, currently a standby to the young Charlie in “Kinky Boots,” just down the street from “Les Misérables.”

Eventually, he’d like to play Marius in “Les Misérables.” “That seems fun,” Mr. Colley said. “He’s the love interest in the show, and I want all the girls.”

Other characters in musicals he’d like to play—”like any kid,” he noted— are Oliver in “Oliver!” and the title role in “Sweeney Todd.”