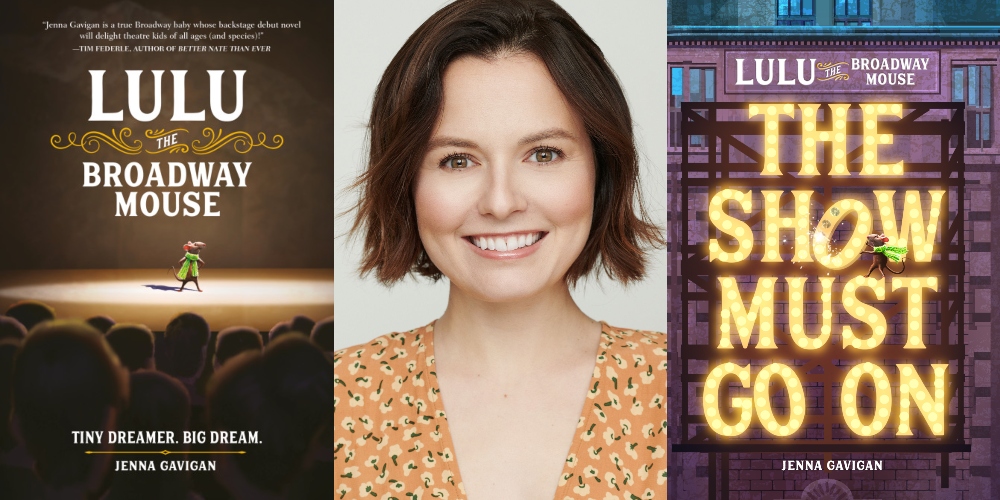 Jenna Gavigan is returning to bookshelves on March 31st with Lulu, the singing, dancing mouse she introduced to us in 2018! Jenna made her Broadway debut at age 16 in the Broadway revival of Gypsy starring Bernadette Peters. She then expanded her career with work on TV in shows like “Madam Secretary” and “The Knick” and movies like “Deliver Us From Evil”. After graduating from Columbia University with a degree in Creative Writing, she published her first novel Lulu the Broadway Mouse, which was met with a great amount of praise from theatre fans and professionals alike. Now she’s back with a sequel called Lulu the Broadway Mouse: The Show Must Go On! We spoke with her about writing a sequel, showing readers the realities of working on Broadway, and meeting today’s Broadway kids. Read on for a super fun interview with great nuggets of advice for kids and adults alike:

You’re back for a sequel after a highly successful debut! Take us through the process to create the plot of the second book.
I knew I wanted to throw Lulu & company an immediate curveball. I have experience with a show that was given its closing notice surprisingly soon—and it happens to almost every performer, at one time or another—so I decided that would be the main “problem” of this book. In my pitch for the book, I wrote a summary and the first few chapters, but also a beat sheet, which is very common in the early stages of television writing—no reason it can’t be used in book writing as well! Basically: A,B,C,D storylines, in one short, sentence. So, I, and my editor and publisher, were able to very clearly see my planned plot points, with the show’s closing notice being the A plot.

What’s the most rewarding and most challenging thing about writing a sequel?
I basically spent all of 2019 writing and editing this book. On January 1 I had a few chapters written, and by Christmas, the finished copies of the book were in a box in my apartment. It was a really joyful and fulfilling way to spend a year. Challenging? Hmmm…well, writing and editing a book in one year was also challenging! And I needed to make sure the second book stayed consistent with the first book as far as characters and their behaviors and relationships, but that it also felt fresh and was able to stand on its own.

The book starts out by delivering the bad news and introducing a major plot point within the first couple of pages before catching us up on the backstage life of this show, which I appreciated as it creates some heartbreak on the reader’s behalf as they keep reading while knowing what’s to come. What was the reason behind that decision?
I thought starting off exactly where we ended the first book lacked energy and urgency. Things would be too sunny and easy. Letting the readers know right at the top of the book that the show is closing will, I hope, keep readers engaged in and committed to the fate of Lulu & company.

What I enjoy the most about the first and second books is that they not only celebrate the wonderful parts about working on Broadway, but they also delve a bit more into the not-so-wonderful parts of the business (i.e. rejections, growing out of a role, etc.). How do you balance out what to include in the book that’s age appropriate and accurate enough for the reader but also keeps the wonder of Broadway intact?
I have been in this business for 20 + years, but I still find the theatre magical, and the wonder of Broadway remains very much intact for me. That said, I have experienced a lot of rejection, horrible auditions, moments of wondering if I should keep doing this…and a lot of that happened while I was still a kid! It’s just the reality of show business and life as an artist. I never want to dissuade a kid from pursuing their dream; I very much want to encourage them. But I also think that knowing the reality of what you’re entering into can actually be really helpful. It’s not all perfect and dreamy all the time, but when it is, it really is. I am writing from a place of experience while also honoring the kid I was: the kid who just wanted to be on Broadway. I try to just find a gentle, honest balance between the two.

Another aspect of the books I love so much is how you treated the gossip columnist T. Mason in the sequel (as well as Amanda in the first book). Both are essentially the “antagonists” of the respective books, but at one point you organically gave them these real human characteristics that we all have. They’re not just dramatic characters thrown in to advance the plot and create conflict (the way T. Mason’s storyline wraps up is beautiful). What was the process behind developing T. Mason’s character and her subplot?
A story without an antagonist can often be a boring and unrealistic story, so like it or not, we need our antagonists! That said, I truly believe no one is cruel or mean for no reason. We learn by the end of the first book why Amanda behaves the way she behaves, so I knew it was important to do the same with T. Mason, who takes over as this book’s antagonist, since Amanda has changed her ways. As actors (and authors!) we deal with critics and reviews—and we also deal with gossip and lies. Introducing the character of an anonymous theatre critic felt like a dramatic yet realistic plot point for Lulu’s story. I also think it’s important to show kids that adults struggle with bullies and bullying, just as kids do. And that adults are often the bullies themselves! But, as with Amanda, we learn what motivates T. Mason’s behavior, making the character more human and less of a generic big bad wolf.

Now as an adult, which character do you relate to the most and why?
Hmmm…I don’t know if I can choose! There are bits of myself and my experiences in so many of these characters. I relate to H.H. in one way, and Amanda in another. Lulu in one way, and her mom in another!

You mention in the Acknowledgements section that you recently performed with Growing Up Broadway, which produces a series of (fantastic) cabarets with current Broadway kids and with Broadway kids who are now grownups. Tell us a bit more about getting involved in that. What was it like connecting (or re-connecting) with the all-grown-up Broadway kids who share a similar experience? What was it like meeting the current Broadway kids? And has any of that experience informed what we will eventually see in the sequel?
Dara, who runs the series, asked me to participate and I was happy to do it! She and I were child actors at the same time, though we never knew each other. (Good odds we sat nervously in an audition waiting room together, though.) It’s so nice to see the that all-grown-up kids still enjoying rehearsing and performing, and it was really a treat to meet this generation’s young performers. They are so talented and hard working. I think what makes things harder for this generation is social media. Everyone knows everything, everything is posted, it’s hard to get away from things. For those of us who got started in the late 90s, there was none of that. You were able to escape and take a break and just forget about the rejection or who got what job and all that. These kids, it seems to be in their faces at all times. Though they seem to handle it well. One of the young performers mentioned how bullying is very real—especially when going back to regular school—so I was glad bullying was already a plot point in the sequel. Not glad she was experiencing that, but glad that I was able to put it in the book to shine a light on it, and hopefully help these kids deal with it.

What do you hope kids will take away from this book both as a person but also as maybe someone who wants to pursue a career in professional theatre?
Please, please, please, be grateful when you work. Be humble. Know it can all go away in the blink of an eye, and maybe never come back. Know that you are a part of a TEAM. While it is hard not to focus solely on yourself, your track, your career, you must try. Every person who is involved in the show—onstage and off—they are all equally important. People will remember your offstage behavior as much as your onstage performance. Be the person who is remembered as kind, hardworking and easy to work with.

What advice do you have for anyone (child or adult) who wants to become a writer (especially if they’re already an actor and not sure if they want to take the leap and pursue both)?
Read!! Reading will make you a better writer. Also, just give it a shot. Journal, write short stories, write plays, write a full novel…just have fun with it! Writing is another way to exercise your creative tendencies; it is another way of playing make-believe. And much like with show business: be prepared for notes, be prepared for criticism, be prepared for rejection. None of this means you’re not meant to be doing what you’re doing. It’s all just a part of the work. (Also: “write what you know” is real. It’s not cheating—it’s a really helpful jumping off point.)

Favorite thing to do in NYC?
Go to the theatre, obviously! Actually: perform on stage at a theatre! That said, I also love a sunny spring or fall day that’s spent walking around a beautiful neighborhood like the West Village.
Favorite place to eat in NYC?
This is a really tough question. We’re so lucky to have so many wonderful restaurants! I’ll say I Sodi on Christopher Street. Delish. Small. Great drinks and pasta. And it’s already really tough to get into so I’m not outing an unknown gem.
Broadway dream role
Can anyone really pick one?? Ok: I’d love to jump on the “two performers trade places every other show” train and say both Sarah Brown and Miss Adelaide in Guys and Dolls.
If you could swap roles with anyone on Broadway (male or female) right now for one night only, who would it be?
I think playing King George in Hamilton would be a blast.
If someone wrote a musical about your life, what would it be called and what would be the name of its show-stopping number?
Title of Musical: So Many Hats
Title of Song: “Balance”