Here’s a throwback to the cast of the recent Broadway revival of The King and I performing at the 2015 Tony Awards! #YoungBway10 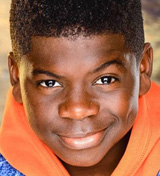 The “Disney Family Singalong,” with Artyon Celestine (A Christmas Story Live) and Alyssa Emily Marvin (Trevor, Number the Stars, Dream Street), is now streaming on Disney+ and Hulu and is set to air on Disney Channel this Friday! Get more details on BroadwayWorld.com.

You can hear Carlos Carreras’ (Radio City Christmas Spectacular) voice in this video for Nick Jr.!

Phoebe Young (The Pain of My Belligerence), Ian Saraceni (Matilda, The King and I), Grace Mozitis (Dream Street), Georgi James (Annie, Billy Elliot, A Tale of Two Cities), Gabriel Amoroso (Harry Potter and the Cursed Child, Medea), Bonale Fambrini (Radio City Christmas Spectacular, The King and I), and many more took part in a cover of “Raise You Up” from Kinky Boots!

And here are pictures and videos from the kids of Beetlejuice, The Bedwetter, and Harry Potter and the Cursed Child!