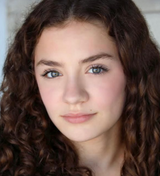 Anna Rae Haller (Frozen) will reprise the role of Young Elsa in the national tour of Frozen for the next two weeks!

Caroline, Or Change and Flying Over Sunset are among Deadline’s Best of Broadway in 2021, and Atticus Ware (Flying Over Sunset) even received a shoutout! Check out the full list on Deadline.com.

Shereen Pimentel (The Lion King) will perform music by Lorde at 54 Below on January 26th! Get tickets HERE.

Presley Ryan (Beetlejuice, Fun Home, The Sound of Music Live, A Little Princess) and Analise Scarpaci (Mrs. Doubtfire, Matilda, A Christmas Story) will sing music by The Jonas Brothers at 54 Below on February 2nd! Get tickets HERE.

BroadwayCon has been pushed back to July 2022. Tickets previously purchased for the event’s original February dates will be automatically honored at the July event.

Atticus Ware (Flying Over Sunset) and Avery Sell (Mrs. Doubtfire) were featured on CBS New York! Check it out on NewYork.CBSLocal.com.

“Take A Bow,” hosted by Eli Tokash (Finding Neverland, Pippin), shares the best of 2021 in a new episode, now available on the Broadway Podcast Network!

You can see Off-Broadway alum Toleeya Napolitano (Dream Street) play Katherine in her school’s production of Newsies this spring! Click HERE for tickets.

Look for Kyliegh Curran (The Lion King) in a new bumper on Disney Channel!

And here are pictures and videos from the kids of The Music Man, The Lion King, Mrs. Doubtfire, The Bedwetter, MJ, and Caroline, Or Change!