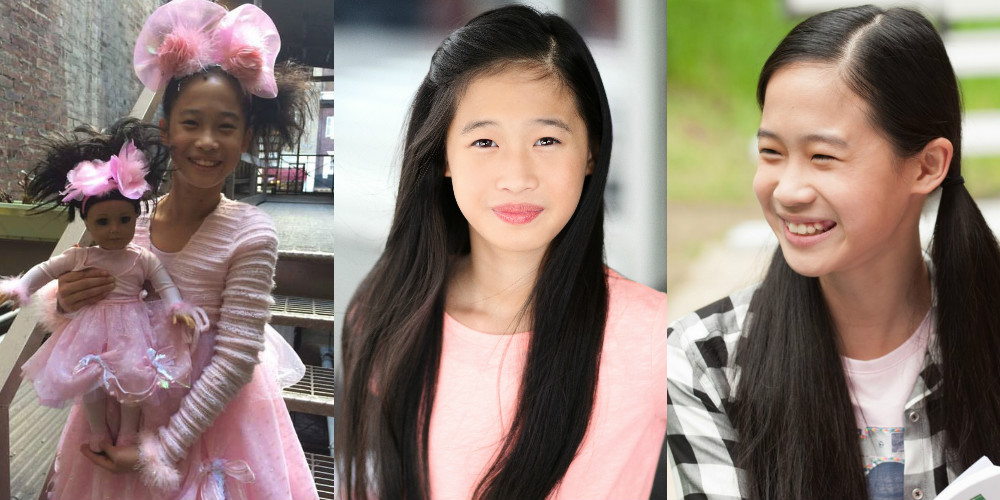 When I Grow Up, our #Broadway kid alumni series, continues with Zoe Manarel who made her Broadway debut at the age of 9 in the smash-hit Matilda! Since then, she has starred in The Secret Garden at The Denver Center and is now starring in the new American Girl movie “Summer Camp, Friends for Life”, a story about Z Yang (American Girl’s newest doll) who loves film making and stop motion. We talked with Zoe Manarel about her journey to Broadway and beyond.

How did you get started in the entertainment industry?

When I was little I always sang and everyone said I had a great voice for a kid my age, but mom would say that they are confusing my cuteness for talent. She did not think a 6 or 7-year-old could actually have a good voice so she just ignored them, One day a someone suggested that she take me to someone to see if I actually had some talent, so my mom caved in and took me to a Lady by the name of Becky Baxter Ford, she said I had a very good voice for my age, my mom thanked her and left. A couple of days later we got a call from her asking if I wanted to audition for Annie on Broadway! It turned out that Miss Becky’s husband was Merwin Ford who played FDR in the musical, Annie, and he got me an appointment to audition for an orphan! My mom was NOT very into this but said I could go and see what happened. I went straight into call backs, and had no idea what I was doing but I had a lot of fun and got through the first 3 cuts – I did not book the role but I LOVED auditioning and begged my mom to continue and after a lot of talking with my Dad, they said I could continue, so we went and I did a showcase at A Class Act NYC with Jessica Rolfe and that’s where my Agency, CESD found me! It’s been amazing ever since!

I started auditioning for Matilda when I was 7 and of course I was too little – so for the next year and a half they called me back three or four times for the role of Matilda but I didn’t get it – But in June 2015 I was called in for the role Lavender and then a few days later I was called in for finals with a bunch of other amazing kids that were all trying out for different roles – we went in a did the dances and sang and then left – and then a few days later I found out I booked the role of Lavender!

Take us through the moment you found out you booked Matilda.

Well, my mom made a card with a photo of me dressed up like Lavender and it said, “CONGRATULATIONS Zoe! You booked the role of Lavender!!!” and she put in an envelope and made it look like it was mailed to me –

So she went out the mailbox and said I received a letter. On the outside, it was addressed to me but said it was from a secret person –

When I opened it I read it and at first, I got excited but then I thought it was a prank so I didn’t know what to think – when my mom explained it wasn’t a joke I went CRAZY, I jumped up and down and was screaming !!!! I couldn’t believe it!

I have a video on my Instagram that my mom taped when I first opened the “letter” that said I booked the part:

(READ MORE AFTER THE JUMP)

What usually goes into preparing for a performance of “Matilda” (i.e. warming up)?

Wow – there is a lot of daily prep that is expected of the kids – First is that the kids have a 2 hour call time instead of a 1/2 hour like most shows – but it totally makes sense – because of the all the dancing we do, and the scenes with dangerous props like with swings and vaulting, so the 2 hours are used in doing calisthenics, voice warm-up, notes, and safeties for the dangerous scenes – This way the chance of something going wrong was less and everyone was prepared to do their best!

What was it like living in California while you filmed American Girl: Summer Camp?

I totally LOVED living in LA! It has such a relaxing vibe compared to NYC – no one seems to be rushing anywhere. We had an Air B&B which was really nice and close to everything even though we had to drive everywhere but I didn’t mind – I loved shopping at the GROVE and visiting the HOLLYWOOD sign and Grumens Chinese Theater and making my own star on the walk of fame which looked REAL! The whole trip was amazing and I hope to spend more time there in the future.

I loved filming in the woods and at an actual summer camp! It had a cafeteria, bunks, and cool hiking trails, all the things a great summer camp should have. Filming there made the whole thing more real for me and sometimes on my down time I was able to take pictures of the beautiful nature around me. The one crazy thing I saw was a pack of coyotes! I only saw them when we were done filming for the day, around sundown, but I saw them a few times and that was REALLY cool!

Oh I am always making films at home – it’s actually one of my favorite interests – I love filming outside and trying different angles to catch the light in different ways – I usually make the story up as I go , my focus is more on the actual filming – I have my own camera which is a Canon ( not an iPhone) and I love using that to film – I could definitely see myself being a director or cinematographer when I grow up.

Do you have anything fun planned for the summer?

I have one project planned – But other than that I’m planning on seeing my friends, swimming, taking Spanish lessons and I definitely want to see Dear Evan Hanson this summer ( if we can get tickets ) – My family usually goes on a trip but we haven’t planned it yet, but whatever it is I’m sure it will be a lot of fun !

Do you have any advice for kids who want to become professional actors?

I would tell them they need to be committed, and that they need to NOT get discouraged if they don’t book things right away – They need to focus on the Call back, that’s what I always focus on – because only one kid gets the role, but if you get called back that means you did everything right and to me that’s a WIN!!! and now at the CB they need to fit the right actor to the role – My mom told me that its like a puzzle, make-believe the whole puzzle is completed except for one piece – and that piece is a specific size, shape, and color and only one piece will fit into that specific puzzle, so if you don’t get something, don’t take it personally, it’s not because your not talented, you just didn’t fit into that particular puzzle and Dont Give Up there will be lots more puzzles to come 🙂

“Summer Camp, Friends for Life” is now streaming on Amazon! Thank you Zoe and mom Laura for answering our questions. Trailer below!