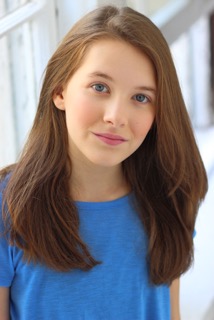 When you were a kid, what did your school projects involve? Now what would those school projects involve if you’re a 12 year old with a Tony Honor and two Broadway shows on your resume? Tony Honor recipient Sophia Gennusa, who previously starred in Matilda and appeared in Doctor Zhivago, is using her talents for good through Pop for the Heart, a cabaret which aims to raise money to fight children’s leukemia. I (Lindsay) talked to Sophia about the cause as well as her hobbies, what her typical day is like, and all things pop culture she currently enjoys. Pop from the Heart will be held on May 22nd at 4pm at the Laurie Beechman Theatre. Let’s jump in!

What made you want to pursue acting professionally?
I have a godfather, John Treacy Egan, and he is a broadway veteran. When I was very young, he exposed me to broadway and performing at young age(4). My first broadway musical was The Little Mermaid, which he was in, and I was so mesmerized by all the magic of the lights, set, and costumes that made it seem so real. After a while, I got caught up in the virtual reality world, and I knew I wanted to perform. The funny thing was, I was REALLY shy.

Who are your mentors/inspirations?
Mostly, I need to give my parents credit for this one because they have been so influential towards my path in life. Even though they were a little surprised at first,(because they knew I was shy), they have supported me every step of the way. Some other inspirational mentors are pop singers such as; Taylor Swift, Ed Sheeran, and Ariana Grande. I say this because when they write their own music they let their creativity flow, reminding me to do the same and step out of my shell or comfort zone once in a while.

Other than musical theatre, what kind of music do you enjoy?
I enjoy pop because it has a wide variety of music and artists who create it. Also, I usually listen to it everywhere I go, haha. That’s why I chose it for my cabaret, because I thought it would be really entertaining.

Take us through a day in your life.
Well, like most people I wake up at around 7:30 am and school starts at 8:30 am. My goal is to get to school by 8:00 though. However, I tend to stall a lot, by just being awake in my bed, to lazy to get up, and staring at the ceiling. After I get myself up and get ready I head to school. After school is over, it really depends what I do. If I have an audition though, I try not to get out of school early,(although sometimes I have to), because I don’t like to miss stuff and I take academics seriously. After I head into the city, I make my way to the audition. Most people don’t realize it, but auditions can be really short, like 2-5 minutes short. Even though the actual time in the room auditioning can fly by, the actual travel time getting in and out of the city can take longer. I take this time to do homework. After dinner, I get ready for bed and go to sleep until the next day.

What other hobbies do you have, other than performing?

Some other hobbies of mine include doodling,(sometimes on school papers), dancing, writing, sometimes shopping, and I like to read. Also, I don’t do it as much, but I love archery. My hobbies take up my weekends, since I’m usually occupied on the week days. 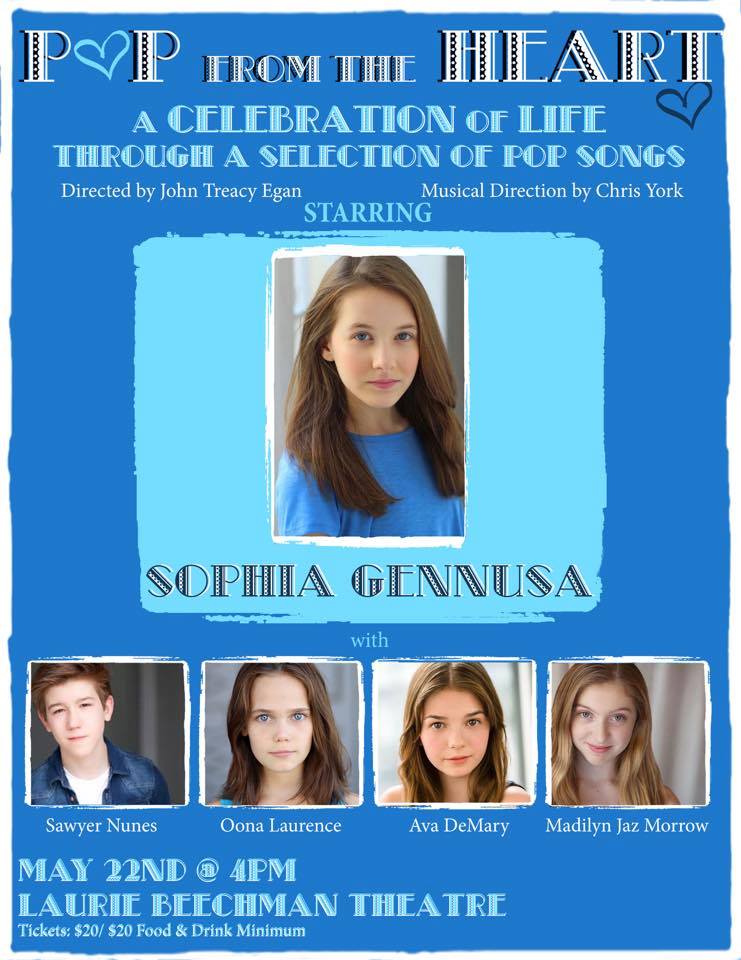 What is a book or TV show or film you currently recommend?
For books, I recommend “WildWood” by Meloy Ellis. This is because I’ve been really into adventure books recently. For TV, I just started watching “The Flash” and wow, it is so good, I totally recommend it. And for film, I watch a wide variety of things but I just saw “The Jungle Book” and it was unbelievable, you need to go see it.

Explain to us what Pop from the Heart is.
Pop From The Heart is my own cabaret I’m doing to raise money and awareness for Children’s Leukemia. I actually started this with a friend of mine Maddie in school for a project. We wanted to think of an effective way to raise money and we figured, we could do a cabaret. John Treacy Egan is my director and Chris York is my musical director. It is on May 22, Sunday at 4:00 pm. Here is the link for tickets: https://web.ovationtix.com/trs/pr/958455 Hope you all can come!

What is the rehearsal process like for a cabaret?
Since I’m performing with some of my best friends for Matilda, Ava DeMary, Oona Laurence, Madilyn Morrow, and Sawyer Nunes it’s a lot of fun to hang out with them all and it is great to work with talented people like them. However, the only thing that is hard about rehearsals is actually having them. With all our busy schedules, it’s hard to plan a time where all of us could meet up. Luckily, we didn’t have much trouble and we worked out times. Sometimes, depending on the show, rehearsals can be really long and tedious, but we tend to shake things up and have fun while singing. After all, isn’t that what it’s all about?

Other than rehearsing material for Pop from the Heart, what else did you need to do in order to prepare for the show (i.e. research, marketing, etc.)?
As stated earlier, Maddie and I chose this as a school project. Once we had decided that we wanted to do a cabaret the next problem popped up, where to have it? In order to do this, we had to call a couple places in Manhattan to ask some availability dates. This is where help came in. Tiffany Schleigh, I want to send a huge thank you. Tiffany has her own organization for charity work as well called Cabaret For A Cause that I have been apart of for 2 years now. that raises money for various reasons such as cancer and homelessness. She helped me out a lot with renting the Laurie Beechman theater and getting the date and time. Most of the other planning consisted of research for the actual topic; Leukemia.

What do you hope to do next in your career?
I really hope I can spread more awareness by opening up the idea of more cabarets across the country. I also want to take a look into film. I have wanted to start doing more movies and TV because I watch so much of it and I really want to experience it.

Be sure to get tickets for Pop from the Heart over at OvationTix.com. Be there on May 22nd at 4pm at the Laurie Beechman! Get more info at WestBankCafe.com.

Tomorrow is the Toys for Tots Variety Show, starring lots of Broadway kids from Evita, Kinky Boots, Once, and more! Make sure to check it out!

The kids of The Sound of Music LIVE take the stage at 54 Below on December 17th! Get your tickets and more information on the event HERE!

And here are pictures from the kids of Radio City Christmas Spectacular and Matilda!

So happy my grandparents and my Aunt Gretchen came to visit from Kentucky!