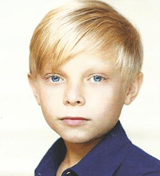 Grace Capeless (Matilda) and Julian Silva will depart The Lion King in March! Here is their schedule, and K’Lynn Jackman‘s and Jahi Diallo Winston‘s, from now until March 20th:

Congratulations to Maya Jade Frank (Evita, Mary Poppins, A Little Princess), who has booked a guest star role on a TV series! Get more information in the Facebook post below:

The kids of School of Rock will do a talkback after the February 9th performance of the show! Find out more:

Make your kid's rock dreams come true on 2/9 at #KidsNightOnBroadway with an exclusive cast talkback! https://t.co/WZFQu8boQe

Nico Bustamante (A Room Of My Own) was featured for his Off-Broadway debut in the Bronx Times Reporter! Read the article:

The Crucible has pushed back its first preview date to March 1st! Get more details on BroadwayWorld.com.

And here are pictures and videos from the kids of Disaster!, The Lion King, On Your Feet, Fun Home, Matilda, and School of Rock!