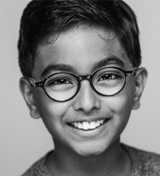 Nirvaan Pal (School of Rock) has been added to the lineup for “A Time to Scream,” taking place this weekend in NYC! Get tickets HERE.

Congrats to Jaden Jordan (Kinky Boots, The Lion King), who has been cast in the upcoming Netflix series “Grand Army”! Get more information on IMDb.

Check out photos from the Beetlejuice Black & White Ball on BroadwayWorld.com!

Broadway alum Isabela Moner (Evita) has changed her name to Isabela Merced, and she is debuting a new single! Find out more on Refinery29.com.

Congrats to Kaylin Hedges (Kris Kringle), who guest starred on a recent episode of “Almost Family”! Here’s a clip:

Here’s this week’s episode of the Dear Evan Hansen vlog!

And here are pictures and videos from the kids of Beetlejuice and Frozen!