When I Grow Up returns yet again with an interview with 12 year old Hannah Nordberg who’s most known in the New York theatre scene as Olive, the pageant kid with high hopes in Little Miss Sunshine which played Off-Broadway at Second Stage Theater. Hannah, a native of Southern California, has kept quite busy since Little Miss Sunshine‘s run with a stint on General Hospital as well as supporting roles in Dolly Parton’s television movies Coat of Many Colors & Christmas of Many Colors, among many other film and T.V. projects. Now she plays Julie in the next American Girl special titled Ivy & Julie 1976: A Happy Balance. We got to chat with Hannah about acting, her Little Miss Sunshine memories, and – of course – American Girl! The movie begins streaming today only on Amazon.

How did your entertainment career begin?
I started doing musical theater for fun when I was six. It was such a natural fit for me. I loved singing, being on stage, playing different characters, and the teamwork involved. When I turned eight, a friend submitted an audition tape of me for Matilda. I flew back to New York a few times for callbacks, but ultimately I wasn’t chosen. I was completely heart broken, but it made me realize that this is what I’m meant to do with my life. Acting, singing, musical theater are my passions. When we got back to LA, we met with an agent and that’s when it all began. 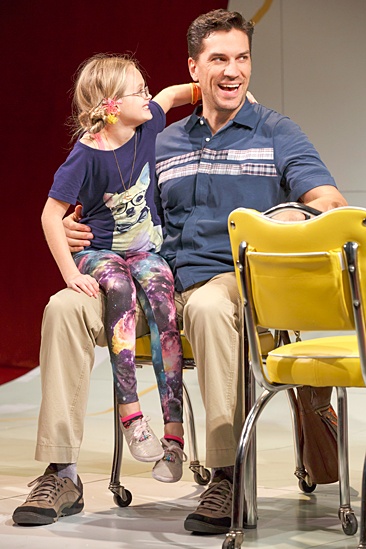 How did the audition for Little Miss Sunshine come up?
They were doing a nationwide search for the role of Olive, so when casting came to Los Angeles, I was called in to audition. I still remember the day like it was yesterday. I was so excited because theater auditions don’t often happen here.

When you started Little Miss Sunshine rehearsals, what was it like meeting your co-stars for the first time?
I was a HUGE Stephanie J. Block fan prior to starting the show! So, I was very star-struck about meeting her. She was as lovely and welcoming as could be. I wasn’t as familiar with my other co-stars, but I remember feeling this overwhelming sense of excitement. I loved them all immediately! It didn’t take long before we were a family. That’s how theater works. You really do become a family.

What was your favorite moment specifically from working on Little Miss Sunshine (rehearsals, opening night, etc.)?
I honestly wish I could rewind and do it all again. I have soooo many special memories that I couldn’t possibly choose a favorite. There is specific show that stands out in my mind though… it was a matinee, when a high school class came to see LMS. They were howling with laughter throughout the show. It was the most spirited and vocal audience we had ever had. As a performer, you feed off the energy in the room, so their liveliness and feedback, was like fuel in our tanks. It was also VERY special when friends and family would come see our show. When you have loved ones in the audience, you kinda give a little something extra. Most of my friends and family live in Los Angeles, so they literally flew across the country to come support me, I mean, nothing feels better than that.

Take me through a day on the set of “Ivy and Julie”.
I’d usually start with hair and makeup and then either head to school or set, depending on when my scenes were being filmed. During meal and school breaks, Nina, Lance, Krya, Kirsten and I would always being singing, hanging out and laughing together. We all really hit it off!!!

Which is your favorite American Girl doll (other than Julie and Ivy)?
Oh, it’s so hard for me to choose… I really like Marie-Grace because of her old fashioned style. Over the years, I spent countless hours playing with my AG dolls – French braiding their hair, dressing them up, and changing their outfits and accessories, so bringing one to life was really cool! 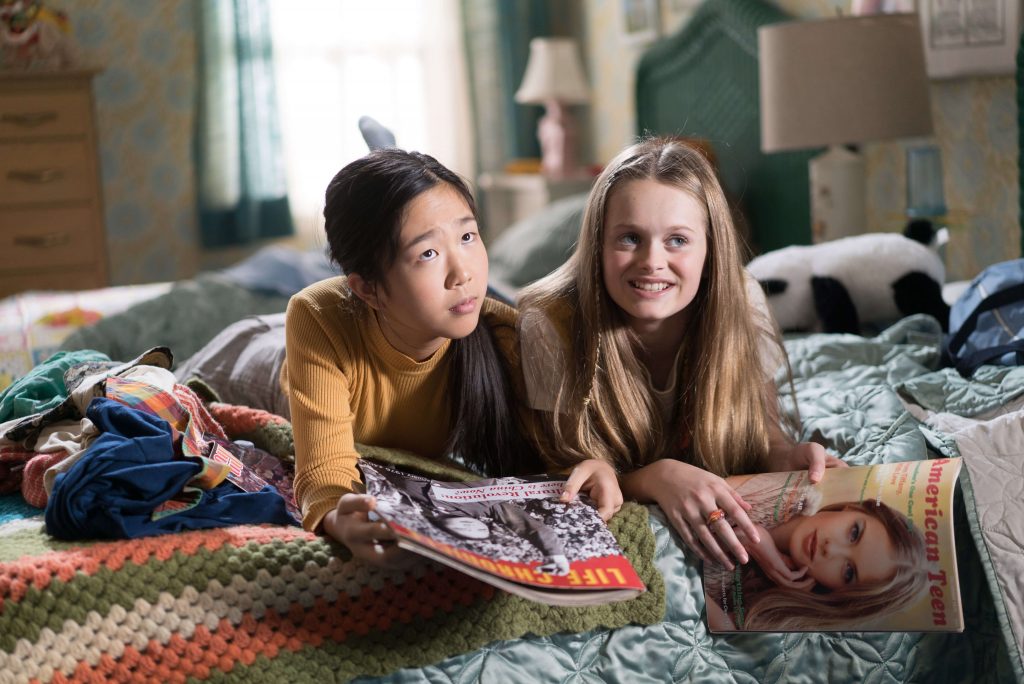 One of the themes of “Ivy and Julie” is family traditions. Does your family have any traditions?
We have many different traditions, but my favorite is spending Christmas in Sun Valley, Idaho with my grandparents. We typically drive and then spend two weeks together snowboarding, sledding, ice skating, cooking, baking, watching movies, relaxing and just being together.

In what ways are you like Olive from “Little Miss Sunshine” and in what ways are you like Julie from “Ivy and Julie”?
I had just turned nine when I was in LMS and I was quite quirky, funny, full of energy, not showbizzy, a very real kid, like Olive. I’m still those things, but the twelve year old version. Julie and I are both pretty happy-go-lucky, free spirits. We are both social butterflies and love spending time with our best friends.

What advice do you have for kids and teens who want to pursue acting?
Be prepared to work really hard. See every audition as an opportunity to do what you love. Always be yourself and believe in yourself.

SPEED ROUND
Favorite thing to do in NY: Going to see shows and visit friends
Favorite food to eat in NY: Pizza
Broadway dream role: Glinda in Wicked, Eponine in Les Mis, Elizabeth Schuyler in Hamilton
If you could switch roles with anyone on Broadway (male or female) for one night, who would it be? Phillipa Soo in Amelie
If someone wrote a musical about your life, what would it be called and what is the name of its show-stopping number?
Through Thick and Thin
No Matter What

Thank you so much to Hannah and her mother Karrie for making the time to do this! You can watch a trailer for the movie which begins streaming today on Amazon!

Thank you all for a successful 2015! Our website turned 5 and 24 new productions opened this year and passed through our website, one of which won the Tony for Best Musical. And one of our very own was honored with a Tony nomination! Here are some personal highlights from the year: the Tony Awards and our staff members meeting so many alumni! We are so grateful for all of the alumni, parents, and fans who support us. This year was incredible. Thank you and happy new year! 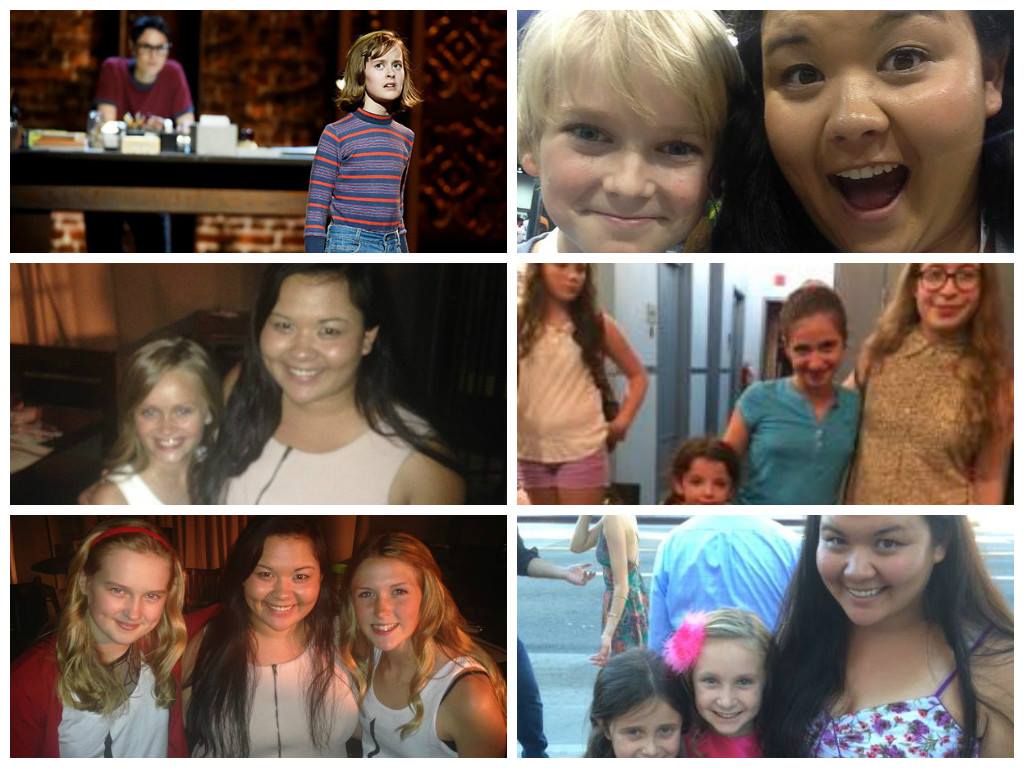 Read Jeremy T. Villas‘s post below to find out when your last chances to see him as Young Lola in Kinky Boots are!

Oona Laurence (Matilda) will no longer be participating in the Broadway kid panel at BroadwayCon–BUT, a new guest is TBA! Check out Cabaret for a Cause‘s post below to find out more:

Congratulations to Jersey Sullivan, who went on as Freddy in School of Rock last night! Here he is with his castmates:

i just wanted to congratulate jersey for doing an amazing job as Freddy tonight!🎸🎶👏 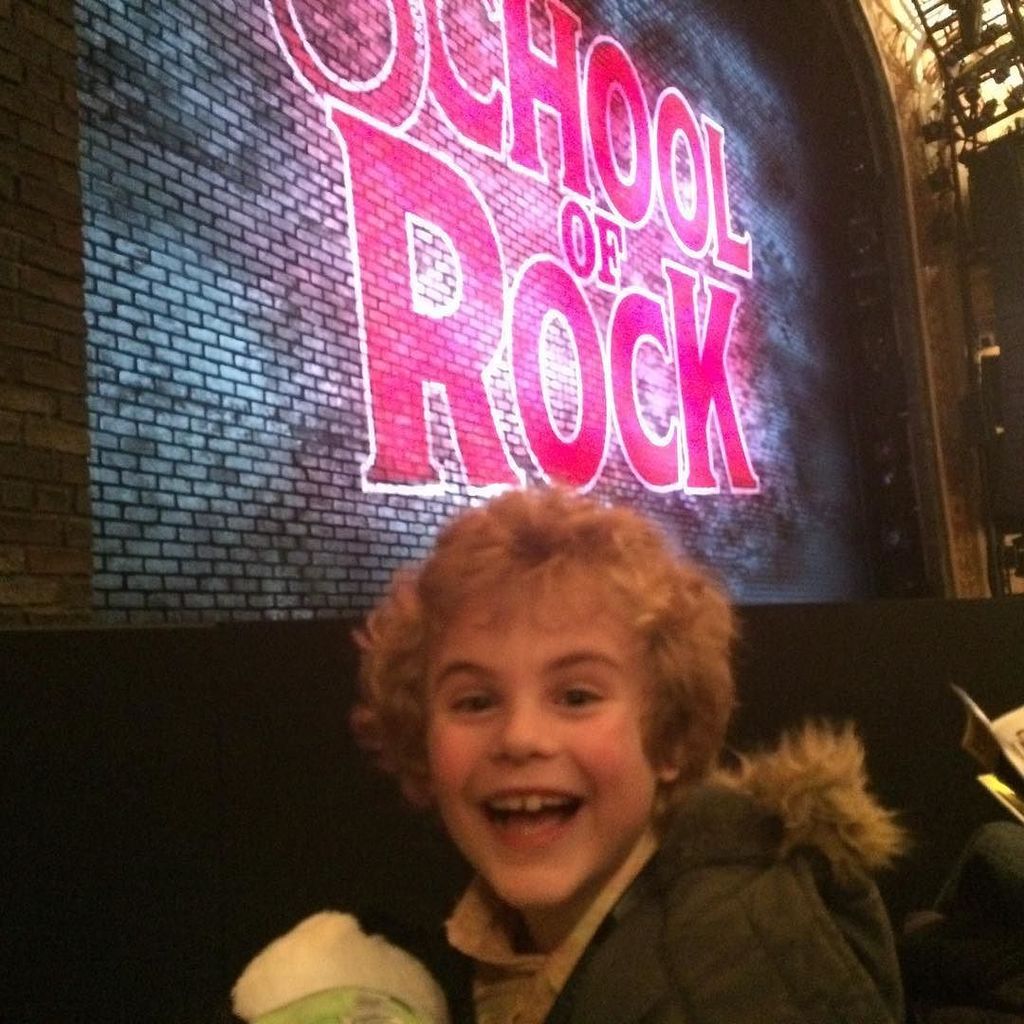 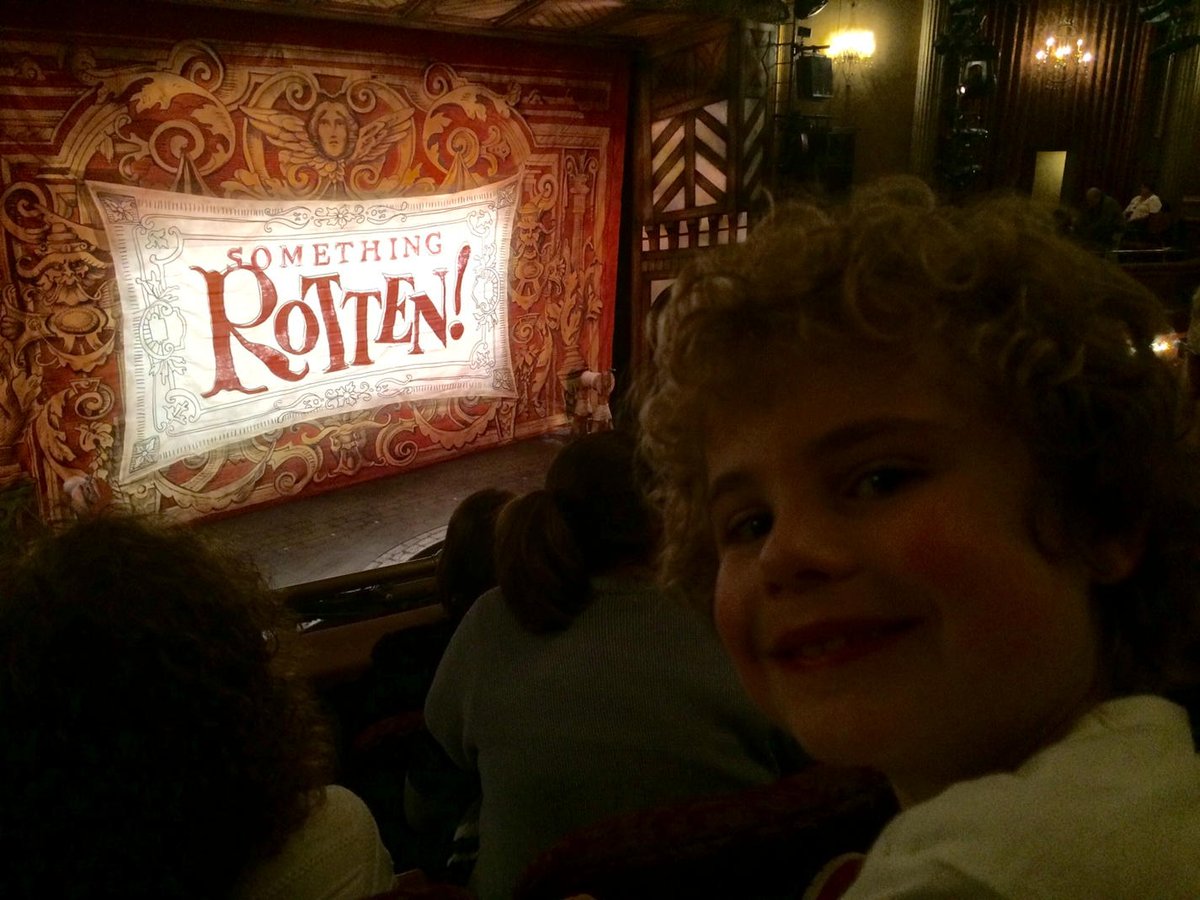 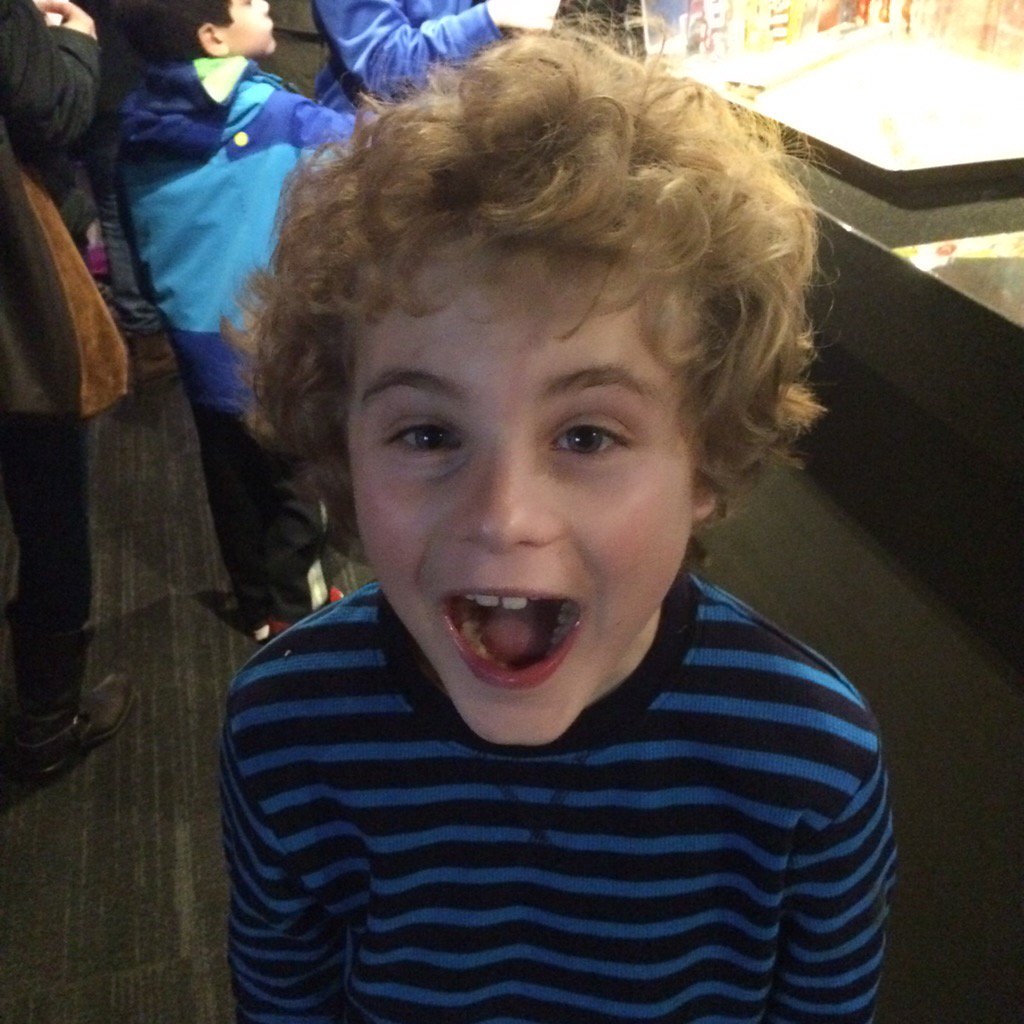 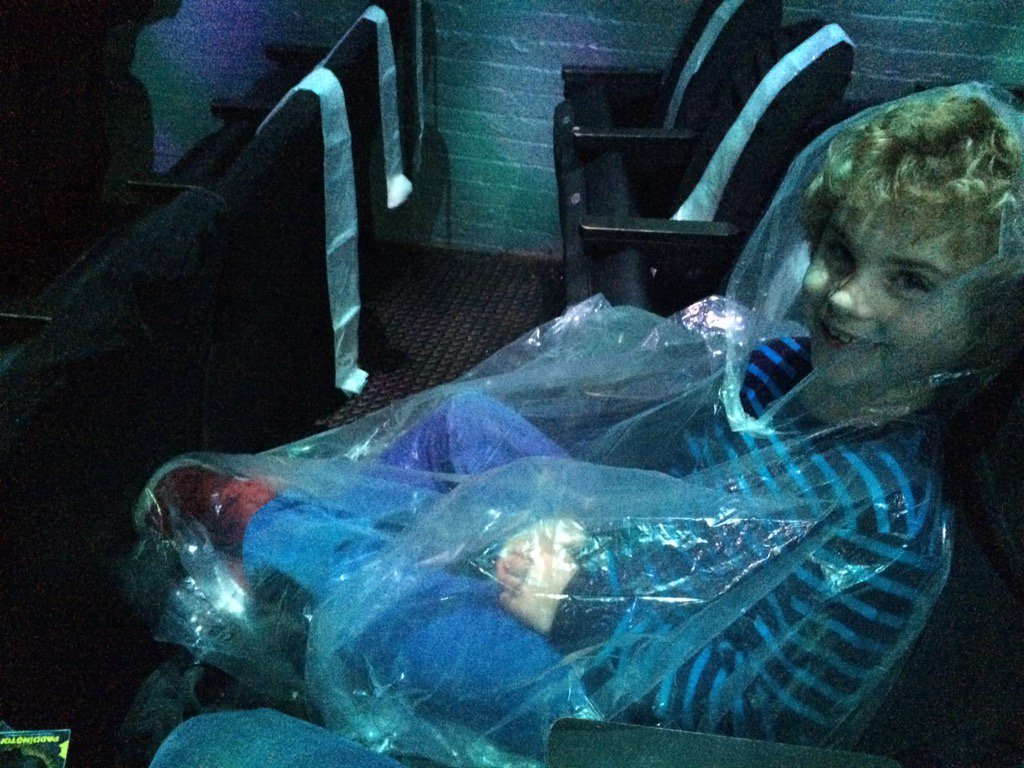 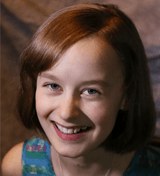 First and foremost, we want to wish broken legs to all of tonight’s performers and nominees in the 2015 Tony Awards! We can’t wait to watch! And a special shoutout to Sydney Lucas (Fun Home), nominated for Best Performance By An Actress In a Featured Role In a Musical! Sydney will also be performing “Ring of Keys” tonight. Keep an eye on our Twitter account, @YoungBwayNews, for live tweets during the Tonys!

Also, wishing a belated happy birthday to YBAN’s Lindsay, whose birthday was yesterday!

Congratulations to Maya Jade Frank (Evita, A Little Princess), who has booked a guest starring role on a TV series!

Fish in the Dark now has a rush policy! Get more information on TheaterMania.com!

Tori Feinstein (Matilda, How the Grinch Stole Christmas!), Jonah Halperin (Doctor Zhivago, Matilda, Kinky Boots), and Rachel Resheff (Fish in the Dark, The People in the Picture, Shrek, Billy Elliot, Mary Poppins) will be at the book launch for “Stagestruck”! Get more information in the post below:

Ethan Halford Holder (The King and I) appears in an “Uptown Funk” battle between The King and I and On The Town! Watch it below or on Playbill.com!

Check out Sydney Lucas‘s (Fun Home) interviews with KidVuz and with Julie James of Stage17.tv below!

And here are pictures and videos from the kids of Les Miserables, The King and I, Matilda, Fun Home, On Your Feet, Finding Neverland, The Lion King, Violet, Annie, Little Miss Sunshine, and Kinky Boots! 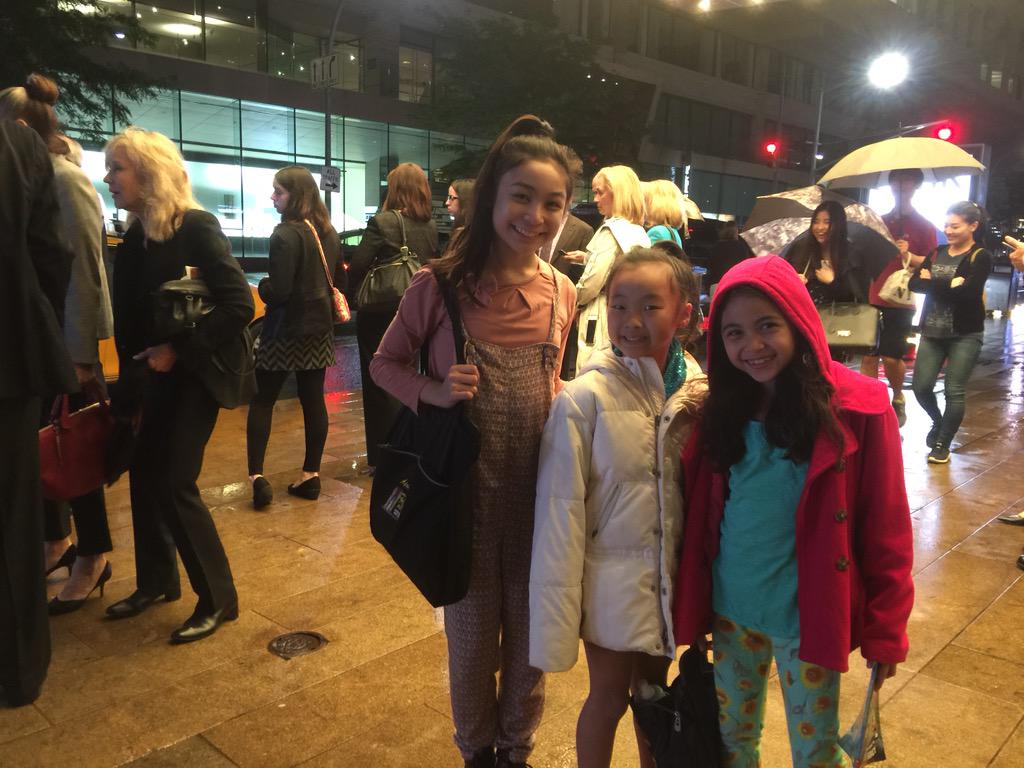 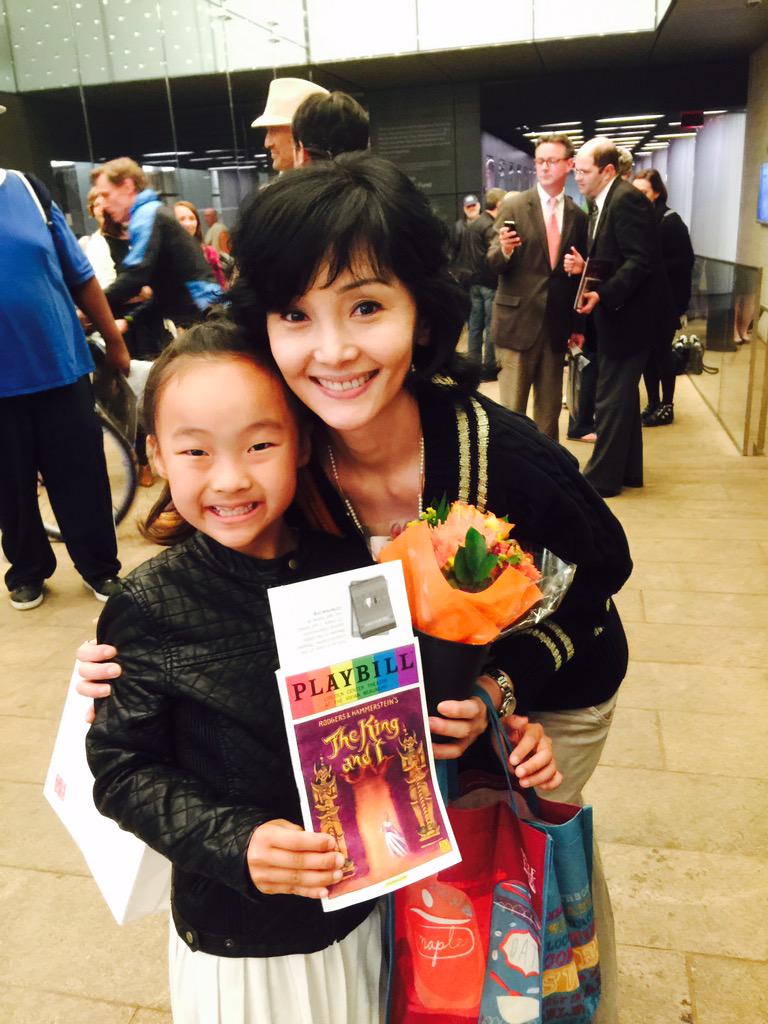 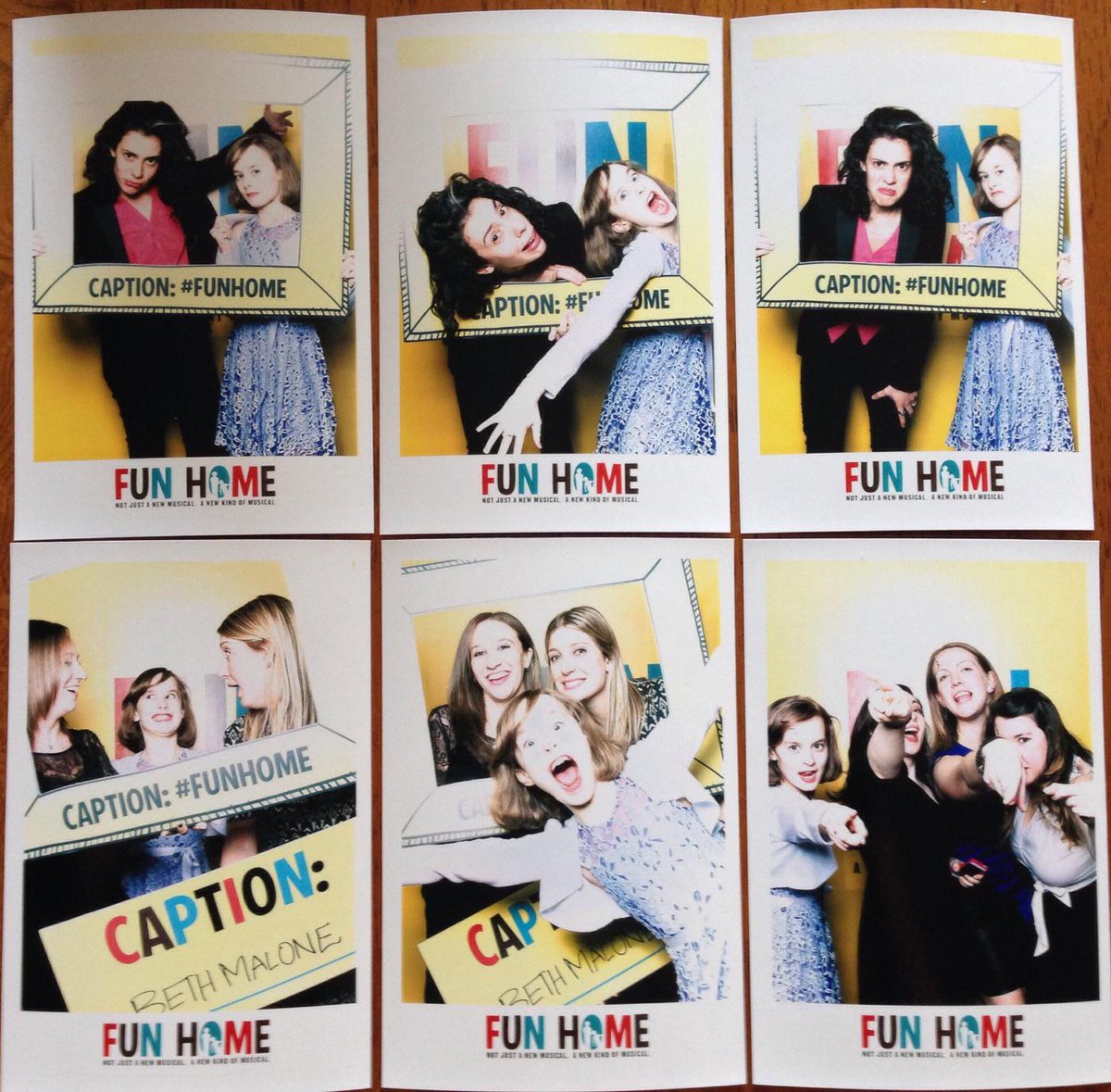 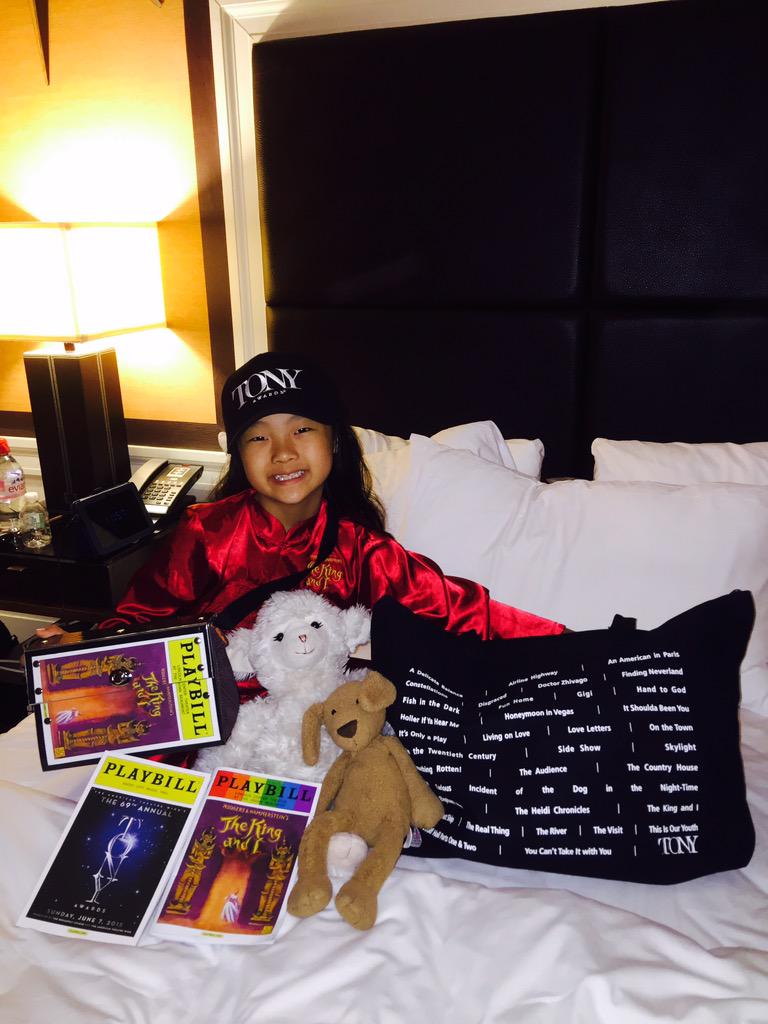 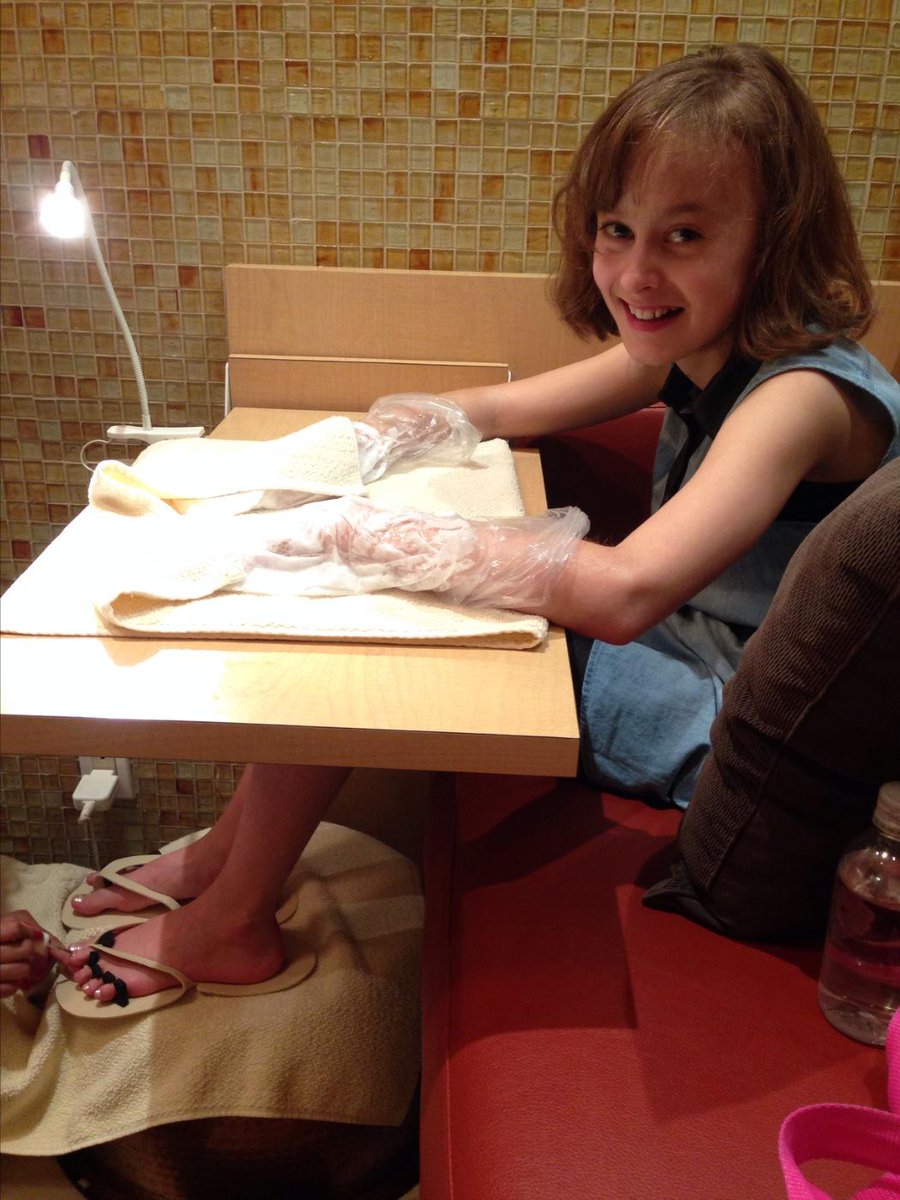 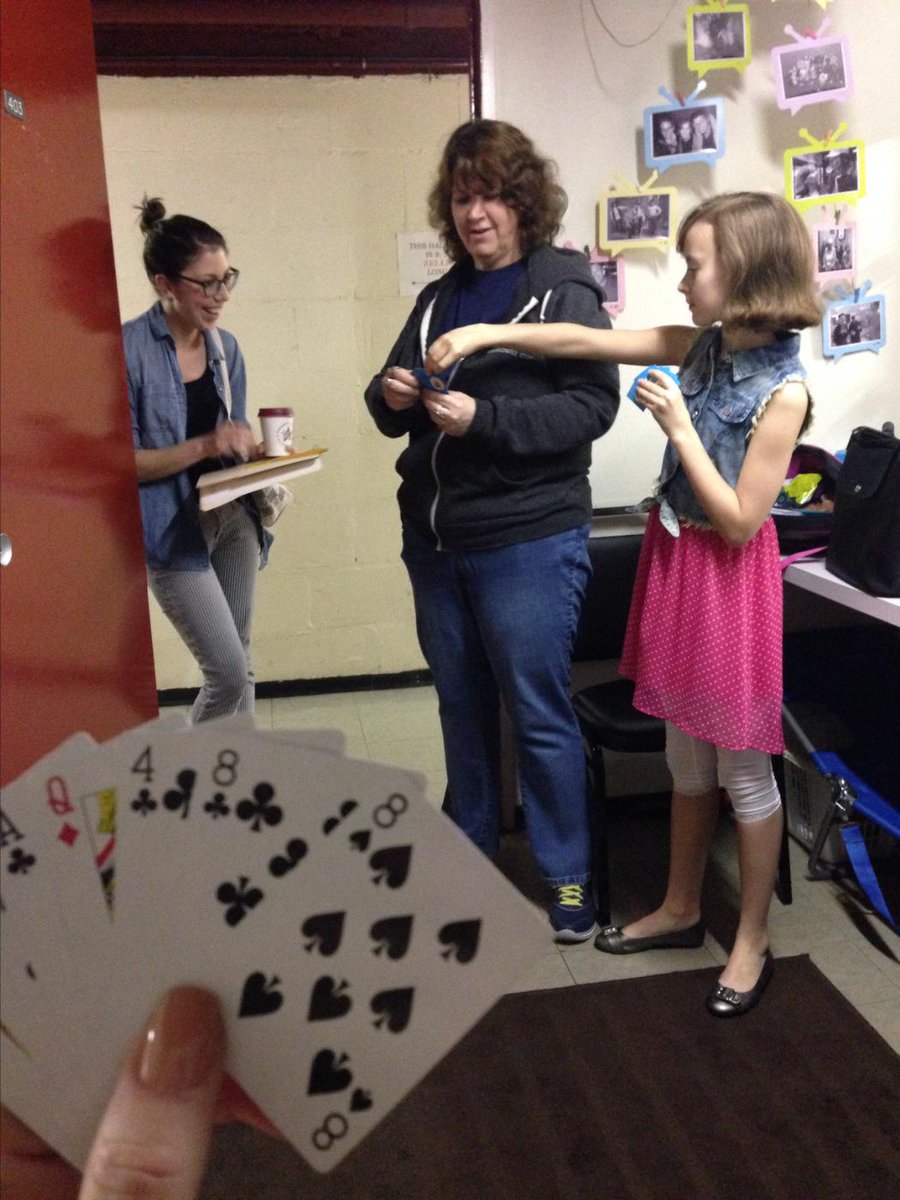 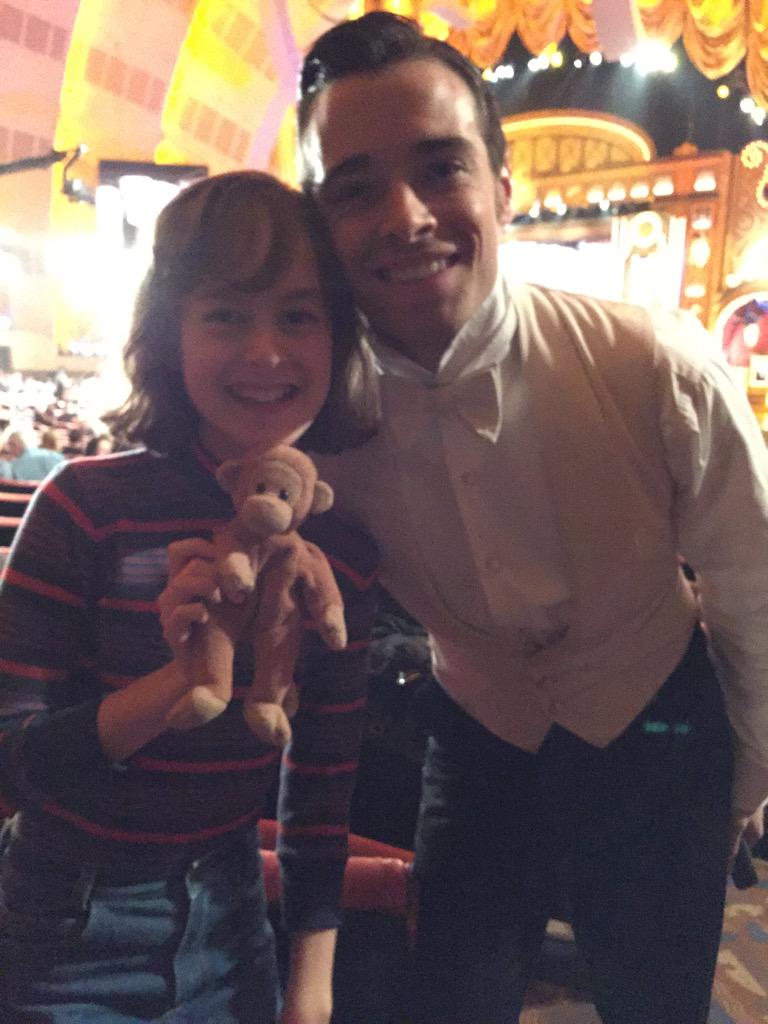 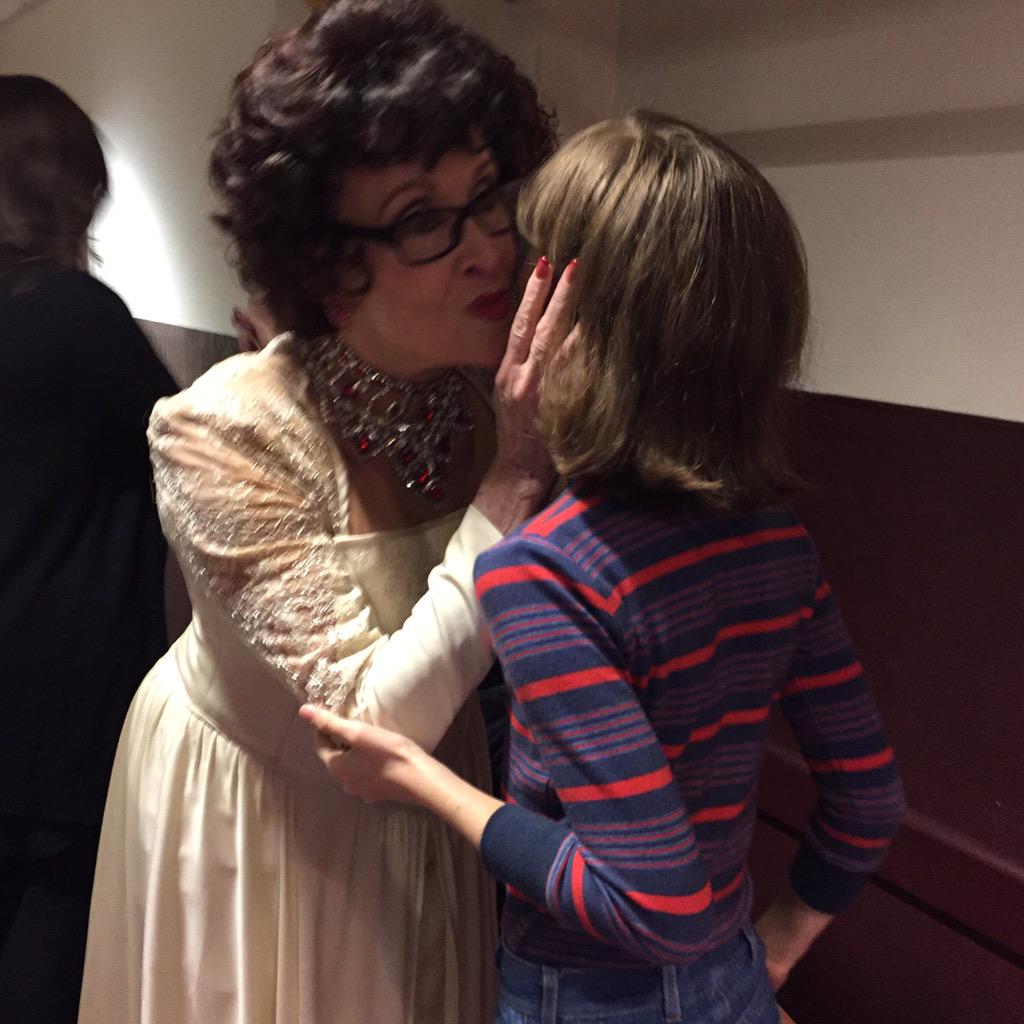 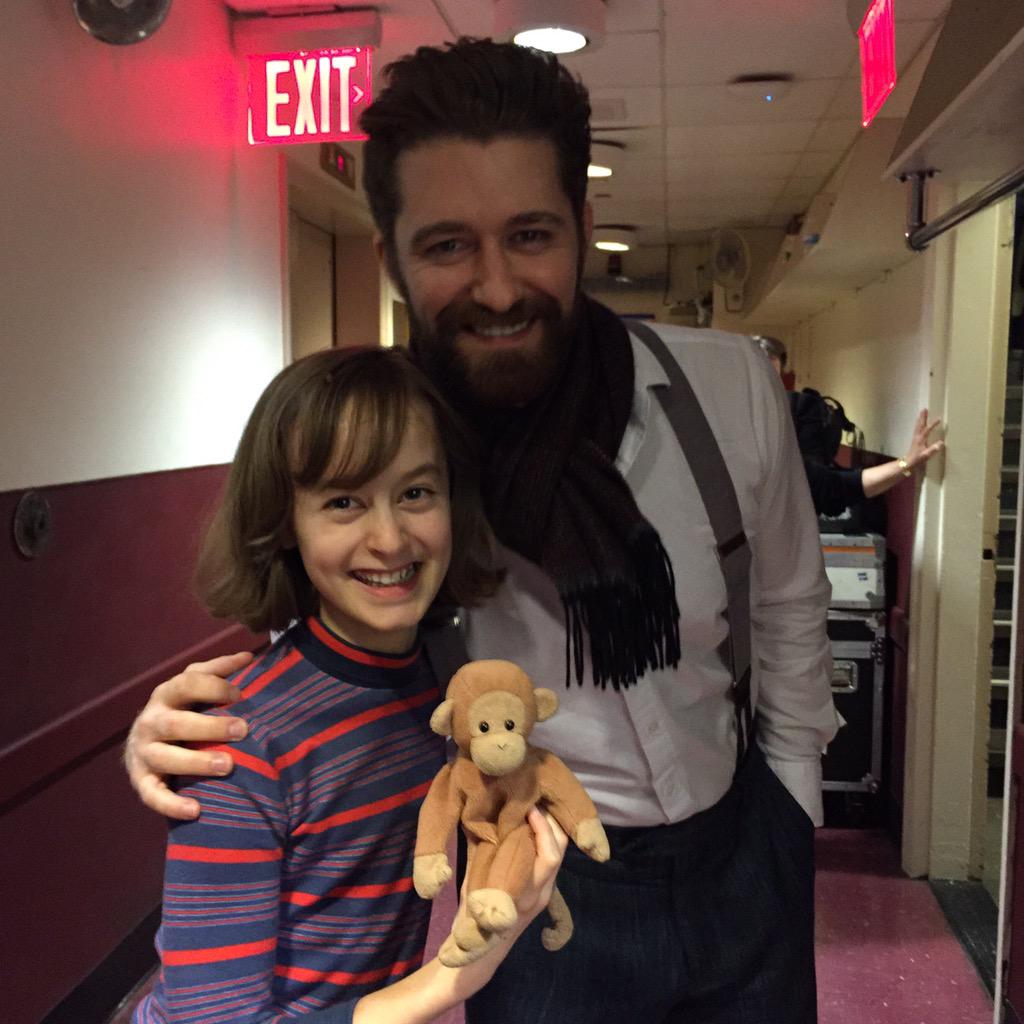 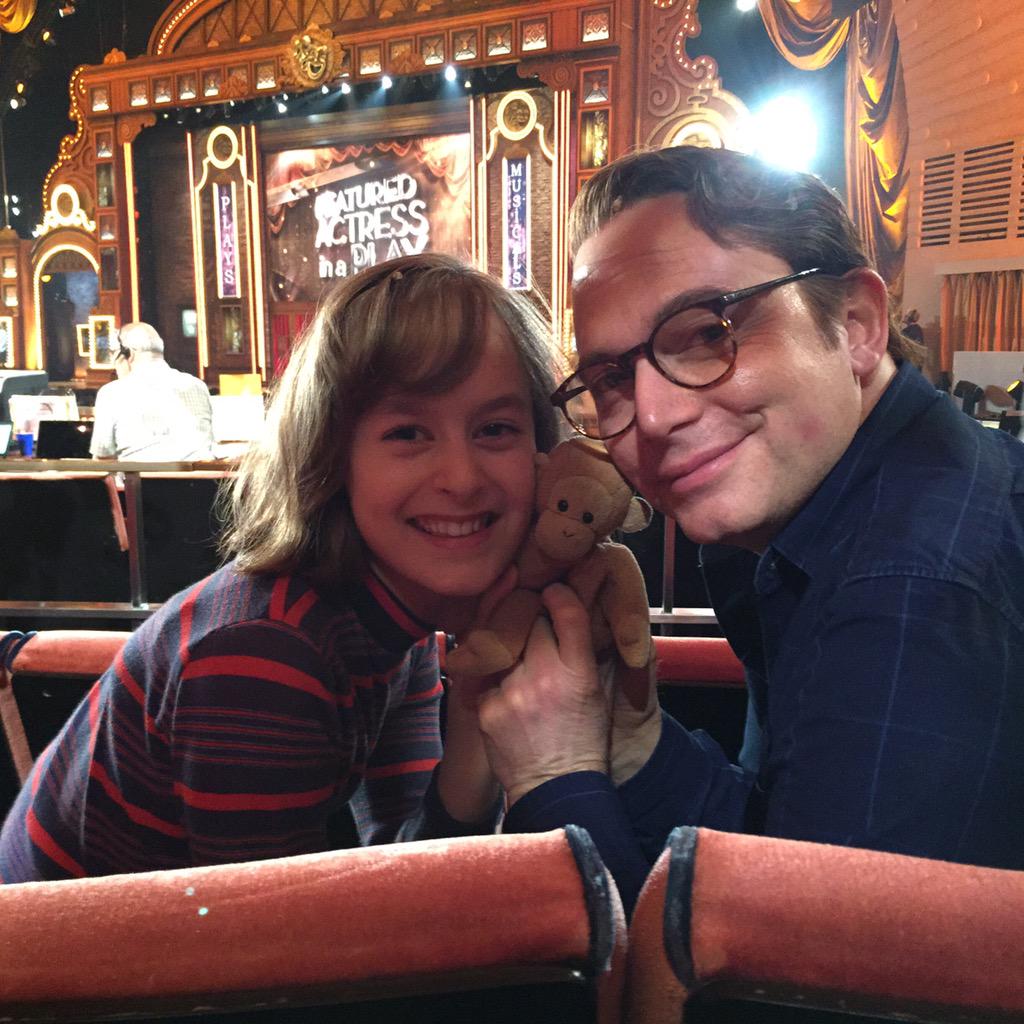 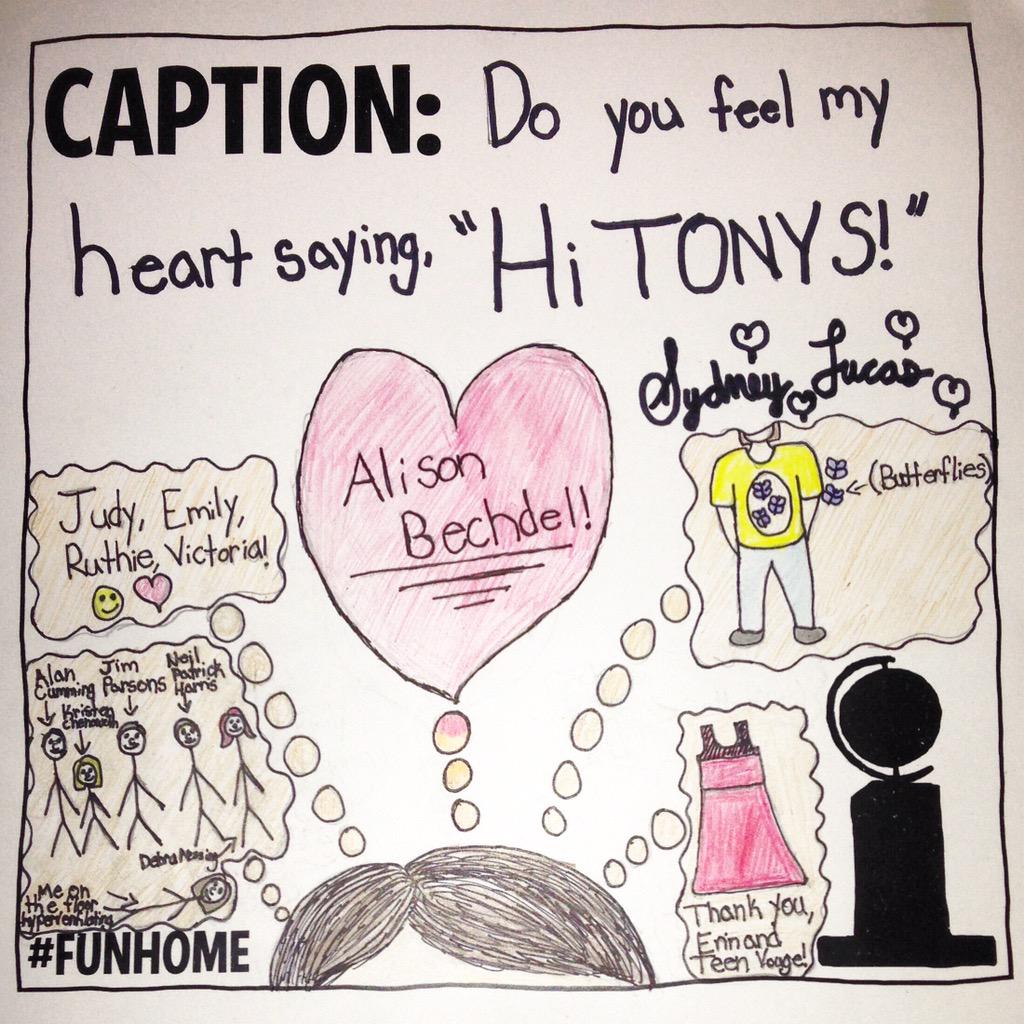 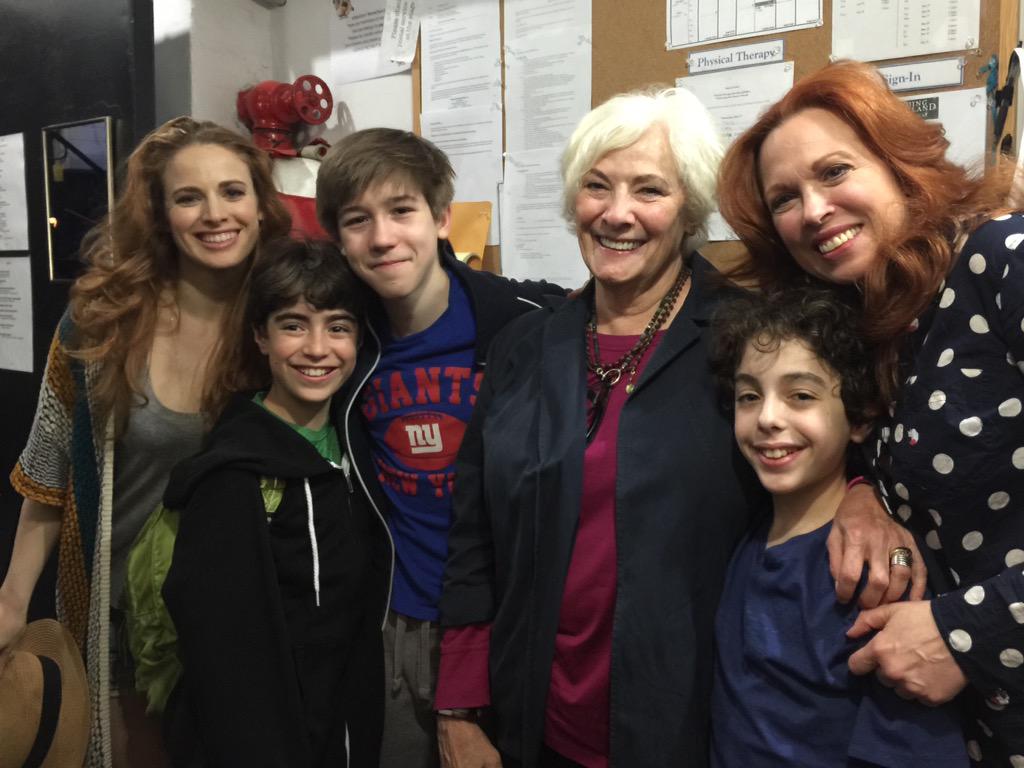 So excited to meet the hosts for the Tony Awards: Alan Cummings and Kristen Chenoweth!

I am hanging out with Cyndi Lauper! She so nice. #kinkyboots #Broadway #acting #Cyndi Lauper #fun 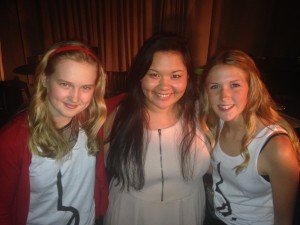 As promised, I (Lindsay) made a separate post about Cabaret for a Cause: LA! I’ve personally never attended an event like this so it was all a new experience for me. I was so blown away by all the talent on that stage! Every singer and dancer that graced the stage was remarkable. Before the show, I had the privilege of meeting alumni Kaci Walfall and Mia Sinclair Jenness (both currently on tour with Matilda), their family, and Tiffany Schleigh, who created Cabaret for a Cause. Then afterwards I met Hannah Nordberg (Little Miss Sunshine), Emma Howard (Matilda, Violet), and Jaidyn Young (Annie) – as well as Jaidyn’s wonderful mother – all so kind! I also met other readers of the website which made me feel so good! I couldn’t believe just how many kind words I got about this website on Monday night. It was a night to remember for sure. Take a look at video and pictures from the event! Below you’ll find Hannah Nordberg (Little Miss Sunshine) singing “I’m Not Alone”, Jaidyn Young (Annie) singing “First Date – Last Night” with Dillon Klena and the whole cast singing “Brave”!

First, make sure to check out our roundup of all the press and photo coverage on the Drama Desk Awards HERE!

Cabaret for a Cause L.A. is tonight! Young Broadway Actor News’s Lindsay is there–make sure to check back later for her pictures and tweets. And to all the performers–break a leg!

Tomorrow, the girls of Matilda will appear on Fox 5 Good Day New York at about 9:40 am! We hope all our New York readers tune in!

“The Little Violinist,” featuring Lilli Jacobs (A Little Princess), was featured at the SoHo International Film Festival NYC! Check out Lilli’s pictures from the red carpet below:

Graham Montgomery‘s Kinky Boots performance schedule through July 25, 2015, is now available! Check it out below:

Emma Howard (Matilda, Violet) stopped by “Baking It On Broadway” to make pumpkin bread! Check out the video below:

The Signature Theatre Company has posted video highlights from The Painted Rocks at Revolver Creek (featuring Caleb McLaughlin)! Watch them below:

Check out the video below from TheaterMania.com of Sydney Lucas and her Fun Home family talking about the development of their show!

And here are videos and pictures from the kids of The Lion King, The King and I, Kinky Boots, and The Audience! 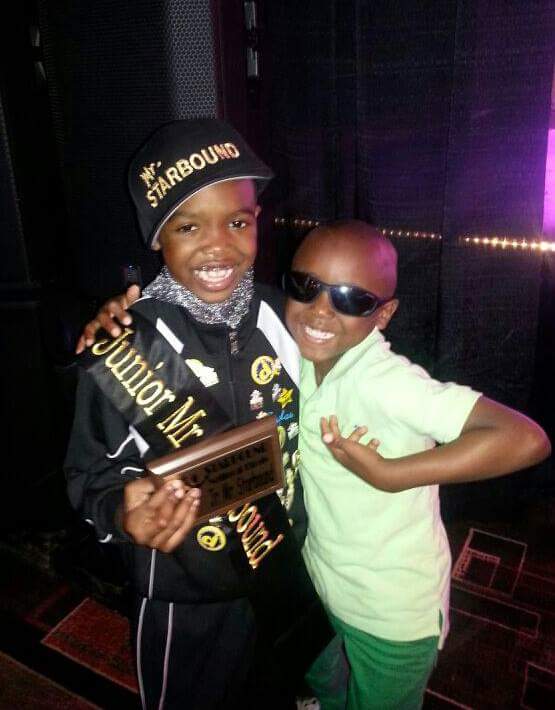 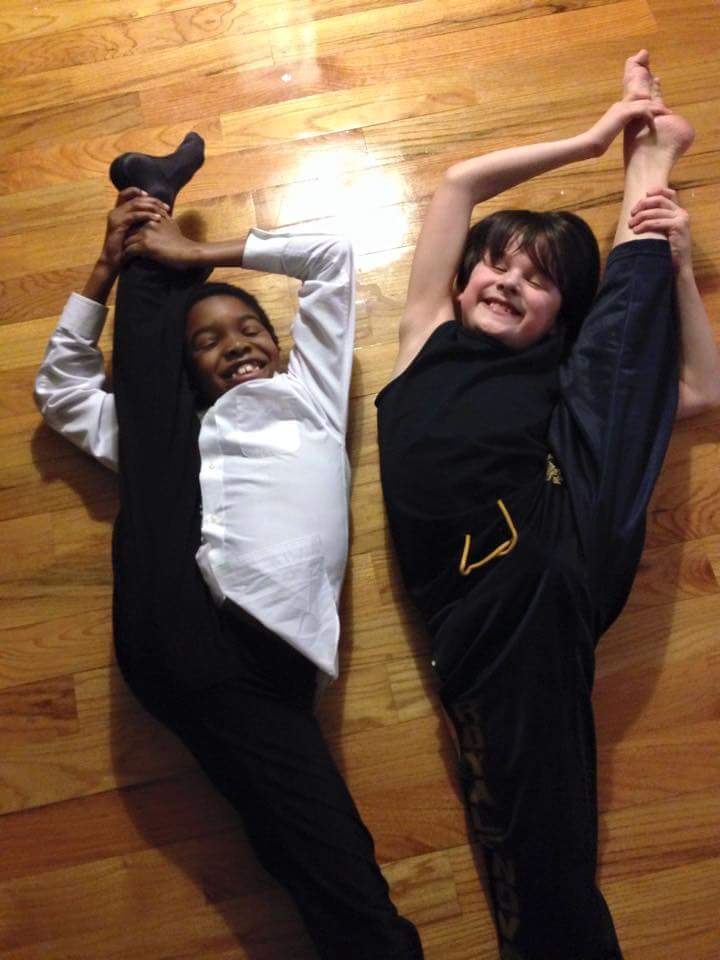